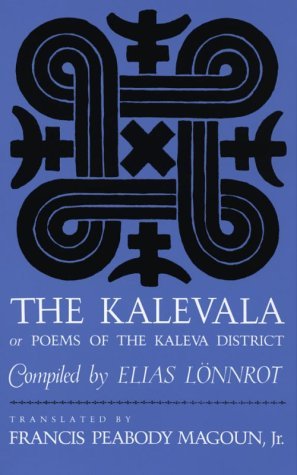 Today I'm sharing a book with you which I have wanted to read for ages! It's a text which was an inspiration for one of my favourite authors and it's also a major score on my mythology-meter! What am I talking about? The Finish Old Kalevala!


The national folk epic of Finland is here presented in an English translation that is both scholarly and eminently readable. To avoid the imprecision and metrical monotony of earlier verse translations, Magoun has used prose, printed line for line as in the original so that repetitions, parallelisms, and variations are readily apparent. The lyrical passages and poetic images, the wry humor, the tall-tale extravagance, and the homely realism of the Kalevala come through with extraordinary effectiveness.

Doesn't this sound amazing? The Kalevala is a really interesting text and I can't wait to dig into it more! Tuesday Intros is hosted by Diane over at Bibliophile by the Sea and Teaser Tuesdays is hosted over at A Daily Rhythm.

'It is my desire, it is my wish,my desire to recite, to get ready to sing.

Beloved friend, boon companion, fair comrade in speech! Rarely do we get together, get to talkingon these wretched marches, poor northern parts.Now put hand in hand, clasp one in the other so that we may sing fine songs, five voice to the best things for those dear ones to hear, those desiring to know them among the rising generation, among the people which is growing up,those songs got from, those as inspired by old Väinämöinen's belt, the depths of Ilmarinen forge,the point of the sword of the man with a far-roving mind, by the range of Joukahainen's bow,from the remote corners of North Farm's fields, from the heaths of the Kaleva District.' p.1

I realize this is a really long beginning but I simply really like this beginning. On the one hand there is the traditional calling for inspiration to sing and recite but on the other hand I feel like there is a strong emphasis on communion and culture.

Again, a bit of a long teaser but just look at it! There is repetition, there is beautiful poetry and there are stunning similes!
Posted by Juli Rahel at 4/07/2015 12:04:00 am