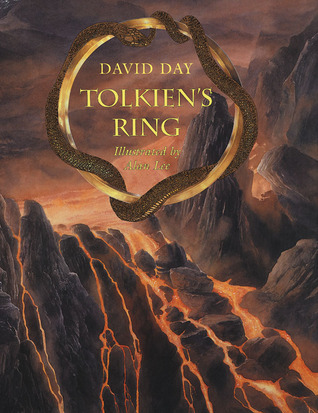 I doubt I have to re-establish my fascination with The Lord of the Rings since it is a well-established fact by now. As such, it was inevitable that I would find my way to Tolkien's Ring.


J.R.R. Tolkien had a great knowledge of, and love for, world mythology when he wrote his beloved trilogy of Middle Earth. In particular, the symbol of the Ring has a rich and fascinating heritage, and this beautifully illustrated literary detective work searches down Tolkien's sources and inspiration. To understand the roots of The Lord of the Rings, we must go far back, to a tradition of ring-quest tales that came into being before the pyramids of Egypt were built, or the walls of Babylon raised. The extraordinary journey passes through the most magical stories told: Norse myths, including the Volsunga Saga; the Arthurian legends; the Carolingian tales, linked to the Holy Roman Emperor, Charlemagne; Celtic and Saxon myths; German romances, such as the Nibelungenlied; and more. By drawing on these potent primary myths and legends, Tolkien was able himself to create a new mythology for the 20th century--and beyond.

Tolkien's Ring is a very interesting book. Day's focus on the symbol of the ring may seem like an obvious starting point, yet I have not read an in-depth analysis of it on its own before. Day draws from all the "normal" inspiration sources with which Tolkien has been credited: the Anglo-Saxons, the Vikings and the Gaelic culture. What was innovative and different about Tolkien's Ring was Day's close attention to the rest of European history, the importance of alchemy and the occurrence of rings in Eastern mythology. Day has introduced me to a lot of new myths and characters such as the Tibetan Gesar of Ling, Dietrich von Berne and 'The Serpent's Ring'. Unfortunately, I found that Day skipped over some points of inspiration which I thought deserved some more attention such as the Finnish Kalevala. It was, in many ways, the text that kick-started Tolkien's imagination and to consider it only as a starting point is unfair.

Besides this it is very clear from the text that Day sees certain sources as taking priority over others. His interest in alchemy and the potential power that a ring has within this tradition is obvious and although it is very interesting the frequent references to it become repetitive at a certain point. He argues passionately for a certain interpretation and thereby neglects to look at the other side of the argument. This was especially frequent in reflection upon the female characters in The Lord of the Rings. Although Day mentions the ingenious gender-reversal of the Orpheus and Eurydice-myth in the story of Beren and Luthien in The Silmarillion, there is a clear lack of passion for it and it is not developed. Similarly, the fact that Galadriel possesses a ring of power is never mentioned. I personally also felt that Day made some very sweeping comments concerning the perception of Gudrun, or Kriemhild, in the Nibelungen-stories which were not entirely justified.

Day's writing style was very informative and generally easy to read. He doesn't use exaggerated academic jargon as a rule, although at times, when discussing alchemy primarily, he has the tendency to throw in phrases and words that could do with some defining for those uninitiated in the finer arts of metallurgy. At times there was also the sense that the different chapters were written separately of each other. References were often repeated or explained multiple times and I think the book could have done with a strict editor, to trim out any of the unnecessary references. Tolkien's Ring has the amazing good fortune of being illustrated by Alan Lee, an illustrator who has done extensive work on The Lord of the Rings and The Hobbit and was a crucial part in creating the world of Peter Jackson's films. His drawings were stunning and really fitted the text well.

Although the above review may seem rather negative, this may in part be due to the fact that I have read many books on this, and the surrounding, subject. Day's Tolkien's Ring is very interesting and brings up a lot of new comparisons and sources of inspiration. Although at times the book leaves more to be desired, it would make a amazing introduction into the fascinating world behind The Lord of the Rings.
Posted by Juli Rahel at 4/01/2015 12:35:00 am