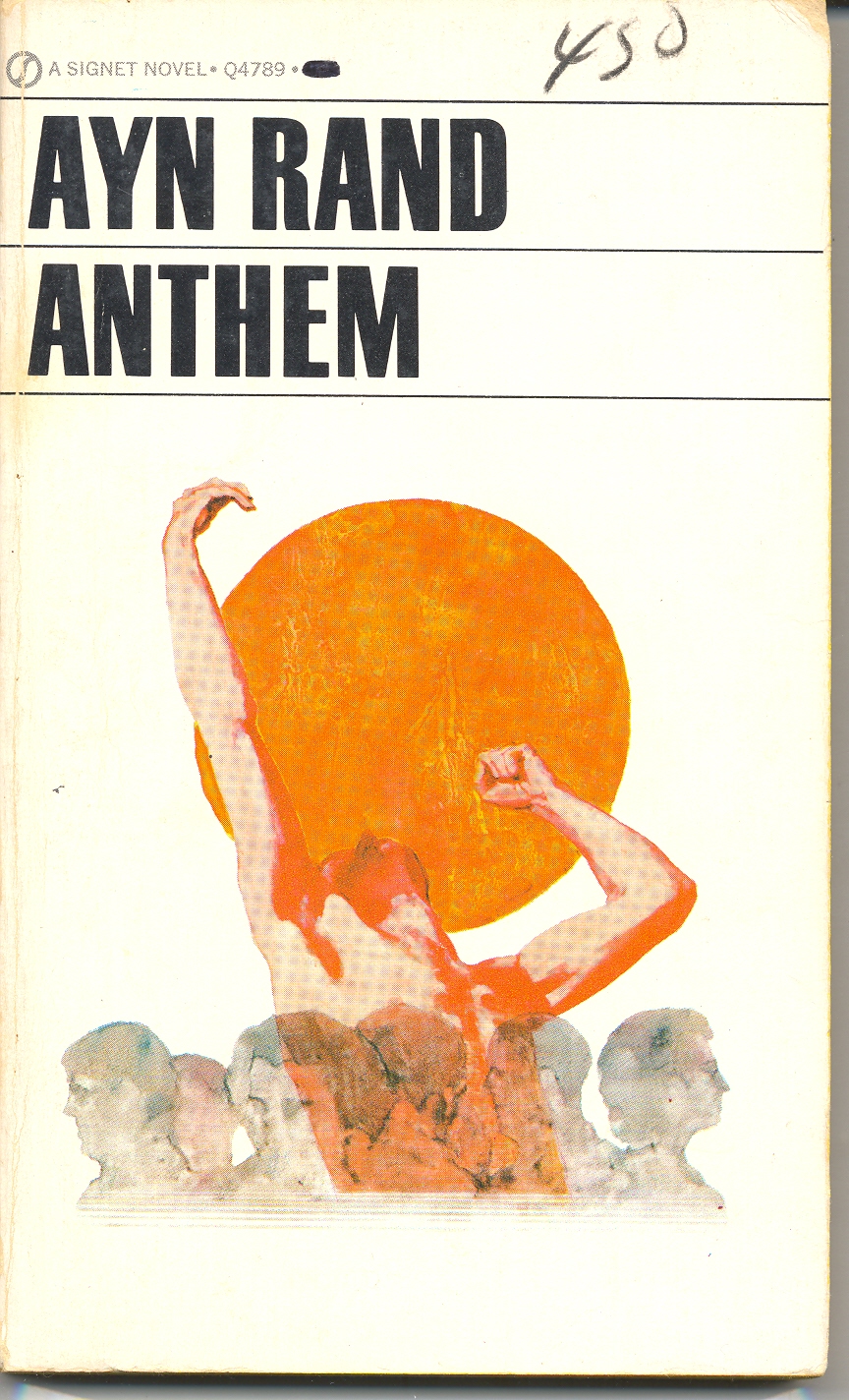 Ayn Rand has been one of my favourite authors since I read The Fountainhead during my first year at university. Rand's philosophy ever so slightly blew my mind away and I have been on a mission to read her other novels since then. This week it was Anthem's turn! Anthem is one of the books on my 100 Classics list, for Our Classics Club!

Part of this novel's genius is Rand's dedication to its ideas in her writing. A novel which is so submerged in a philosophy has to portray that very philosophy on every level and in her narration Rand made sure to emphasize the collective nature of Equality 7-2521's society. He refers to himself and his as 'we' and 'our' and to others as 'them' and 'their'. It is an almost off-putting experience since the reader finds himself desperately searching for the narrator's actual identity. Who is he as an independent person, what makes him special? As such, the reader becomes part of Equality 7-2521's experience and growth. Rand draws you in and you can't help but confront yourself with some of her main ideas when reading any of her novels. The reason why I love reading Ayn Rand's books so much is because they make me question my own thoughts about society and about the self. On the one hand I believe that we should all work together, that the (socially) stronger should help the (socially) weaker etc. On the other hand I am always tempted to agree with Rand that a lot of the world's evil lies in collectivism, the drowning of the self in the larger community. To be alone, in Anthem, is morally wrong and as a consequence the people gladly accept the councils' rules. If the novel seems far-fetched, only think of all the times you have been told not to sit around at home alone but to go out with your friends, to be social, to join in with activities. The journey from the 'we' to the 'I' in Anthem is beautiful and towards the end the prose almost becomes a soaring song of praise towards the ego which the reader cannot help but be swept up in.

There is something beautiful and primal in Equality 7-2521's discovery of self. In many ways he and Liberty 5-3000, the woman he falls in love with, are like a new Adam and Eve who are introduced to themselves after being expelled from Eden. This paradise, created by the councils, is one of no free will and of preordained destinies. In some ways, then, Rand is suggesting that self-awareness can be a damnation as well. As Liberty 5-3000 says:


'"We wish to be damned with you, rather than blessed with our brothers."'

This is something Rand also explores in The Fountainhead, the burden of knowing yourself. In that novel, Howard Roark knows his passion and knows what he wants to do with his life. His struggle to stick with his own dreams and convictions is almost painful at times and recognizable to anyone who has had to fight for something they desperately wanted. To what extent does conforming to the rule benefit you and at which point does it become damaging to you as an independent person?

Rand left Communist Russia in 1926 and went to the United States, where she expected to find in action those laws which had been laid down by the Founding Fathers: that each man has a right to live for himself and has a right to pursue his own happiness. Instead, she found herself surrounded by slogans about collectivism which reminded her of her previous home. I think Rand has been frequently misunderstood in her criticism of socialism and her seeming favouring of capitalism. The way our capitalist societies work now, people disappear into a grey mass of workers who are sent to their nondescript offices each day, hoping to rise a level higher within society. There is no sense of individualism and freedom in capitalism except for those who are rich enough to afford it. If you are poor, you will have to follow the rules and work hard in the hope to one day be the one making the rules, that is how it works unfortunately. I think the socialism that Rand criticized was the one that didn't do anything against these differences and systems.

A question I want to put to you is: do you think selfishness is wrong? And what do you consider as selfishness? Often I see people who consider their own actions as selfless and as self-sacrificing, when really their actions are triggered by a hope for positive outcomes for themselves. I am not saying this is wrong, but how often do you help a friend out in the knowledge that they'll consequently help you out at some point as well? I believe that if people were to acknowledge that a lot of the things they do are for their own benefit, there would be an increase in the kindness people bestow on each other. If I can pursue my own goals and my own dreams I am bound to be a kinder and more passionate person, which would doubtlessly affect the people around me in a positive way.

Although this is largely a discussion, I'm still going to rate this novella and give it:

So, what do you think about Anthem? It is only a short novella and yet it gives plenty of food for thought! Should people maybe allow themselves to be a little bit more selfish rather than always putting other people's wishes before their own? I would recommend this novella to everyone since everyone should be made to face themselves every once in a while!
Posted by Juli Rahel at 4/08/2015 12:07:00 am