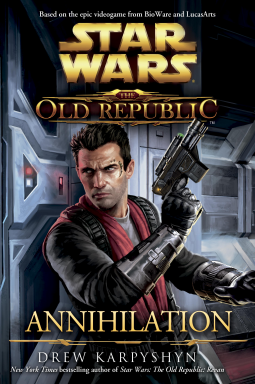 Drew Karpyshyn is one of my favourite Star Wars authors. His Darth Bane books were fascinating and whenever I see a book by him I am confident in his ability to make the books feel like Star Wars.

Based on the epic videogame from BioWare and LucasArts.

The Sith Empire is in flux. The Emperor is missing, presumed dead, and an ambitious Sith lord's attempt to seize the throne has ended fatally. Still, Darth Karrid, commander of the fearsome Imperial battle cruiser Ascendant Spear, continues her relentless efforts to achieve total Sith domination of the galaxy.

But Karrid's ruthless determination is more than matched in the steely resolve of Theron Shan, whose unfinished business with the Empire could change the course of the war for good. Though the son of a Jedi master, Theron does not wield the Force-but like his renowned mother, the spirit of rebellion is in his blood. As a top covert agent for the Republic, he struck a crucial blow against the Empire by exposing and destroying a Sith superweapon arsenal-which makes him the ideal operative for a daring and dangerous mission to end Ascendant Spear's reign of terror.

Joined by hot-headed smuggler Teff'ith, with whom he has an inexplicable bond, and wise Jedi warrior Gnost-Dural, Darth Karrid's former master, Theron must match wits and weapons with a battle-tested crew of the most cold-blooded dark side disciples. But time is brutally short. And if they don't seize their one chance to succeed, they will surely have countless opportunities to die.

From the beginning of this book, I absolutely enjoyed it. Theron Shan is a very interesting character, from his unusual origins to his general attitude. In some ways Annihilation is like a Russian doll. There is a very simple plot, which surrounds a whole range of smaller stories without which the main plot wouldn't work. While the reader is working towards the resolution of the plot, Karpyshyn introduces different characters and different plot lines without which Annihilation wouldn't be as rich and fun as it is. However, Karpyshyn's main focus is on Theron and he seems to love writing about him. Theron is a funny main character who doesn't take himself too seriously in a galaxy populated by Jedi and Sith, but is also very dedicated to what he believes is right. Although initially he may seem to be quite a run of the mill action character, Karpyshyn keeps adding to his character and really giving him more depth throughout the novel. By the end of Annihiliation you'll be wholly on board the Theron-train.

One of Annihilation's main strengths is its multitude of interesting characters. Besides Theron, there is a whole group of characters, each of which feels like a worked out and genuine character. This seems like a very general thing, yet it is surprising how often side characters fall into stereotypes or are used as exposition or "point makers". What I have always appreciated about Star Wars was that its stories span a whole galaxy and genuinely include characters from the whole galaxy. Although many of the characters are human, there are plenty of other species within this novel which mean it becomes a very diverse read. Each of these characters is judged by their actions rather than for their species and the purist attitude of the Sith, who only recruit pure-blooded Sith or, preferably, humans, is, quite rightly, judged. Prejudices towards species are also addressed which adds to the depth of the SW galaxy. The beauty of Star Wars is that it is never afraid to tackle deep social issues, just look at the attention the prequels paid to politics and democracy. However, it always manages to find the grey area between the extremes of good and bad. Similarly, Annihilation doesn't shy away from showing how the bad guys have feelings and how the good guys have weaknesses.

As a female reader I loved seeing a strong female character appear on each page. Whether they were smaller characters such as Teff'ith or "bigger" ones like Darth Karrid, each of them was genuinely interesting in their own right. They have their own story-lines, their own plans and none of their actions are immediately predictable. Each of these female characters is crucial to the progression of the narrative and each of them is strong and independent in their own way. Sure, they make mistakes but they are their own and they are never questioned in their authority or right to do as they please. Star Wars has had some great female role models in its films and tv shows and I am always glad to see when this tradition is continued in the books.

Karpsyhyn is such an established Star Wars writer that it almost feels unnecessary to reiterate it, yet I'm still going to do it. Karpyshyn has earned his stripes as a Star Wars writer by working on the Knights of the Old Republic computer games and my favourite Star Wars books, the Darth Bane trilogy. His writing feels incredibly comfortable, meaning that the book "feels" like Star Wars in every sense. There is no overt reliance on technical terms or a desperate need to make Annihilation sounds like sci-fi. Karpyshyn clearly had fun with this book and it jumps off the page.

Annihilation is a great read for anyone who is a Star Wars fan. Even if the Old Republic-time isn't one you're the most familiar with, this is a novel that you are bound to enjoy. Karpyshyn's writing is fun and engaging and his characters are fascinating.
Posted by Juli Rahel at 4/15/2015 12:03:00 am