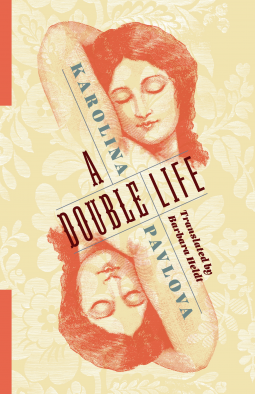 My "mission" when starting this blog was to spread my literary horizons and read more authors from other countries and cultures. A large part of this has been reading novels in translation and publishers liek Columbia University Press and Pushkin Press have been incredible helpful to me in spreading my wings. The latest translated read was A Double Life and it had an incredibly impact on me. Thanks to Columbia University Press and NetGalley for providing me with a copy of this book in exchange for an honest review.


A classic of Russian women's writing that combines poetry and prose

An unsung classic of nineteenth-century Russian literature, Karolina Pavlova’s A Double Life alternates prose and poetry to offer a wry picture of Russian aristocratic society and vivid dreams of escaping its strictures. Pavlova combines rich narrative prose that details balls, tea parties, and horseback rides with poetic interludes that depict her protagonist’s inner world—and biting irony that pervades a seemingly romantic description of a young woman who has everything.

A Double Life tells the story of Cecily, who is being trapped into marriage by her well-meaning mother; her best friend, Olga; and Olga’s mother, who means to clear the way for a wealthier suitor for her own daughter by marrying off Cecily first. Cecily’s privileged upbringing makes her oblivious to the havoc that is being wreaked around her. Only in the seclusion of her bedroom is her imagination freed: each day of deception is followed by a night of dreams described in soaring verse. Pavlova subtly speaks against the limitations placed on women and especially women writers, which translator Barbara Heldt highlights in a critical introduction. Among the greatest works of literature by a Russian woman writer, A Double Life is worthy of a central place in the Russian canon.

Karolina Pavlova, born Karolina Jaenisch in 1807, was a Russian poet and translator and presided over a famous Moscow literary salon. She died in Dresden in 1893, having abandoned Russia not because of tsarist oppression but because of hostile criticism of her poetry and her personal life. A Double Life is her major work.

Barbara Heldt is professor emerita of Russian at the University of British Columbia. Her books include Koz’ma Prutkov: The Art of Parody(1973) and Terrible Perfection: Women and Russian Literature (1987).

As this translation comes from Columbia University Press, it has a solid introduction which is great. Karolina Pavlova was a fascinating poet and author who has not received the kind of praise she deserves. From an early age she showed incredible talent and, after her marriage, hosted a literary saloon at her home, gathering there with brilliant authors from both Western and Eastern European countries. After her marriage ended she first lived in what is now Estonia, and then Dresden, Germany, continuing to write and translate Russian fiction. Throughout her life she struggled against the criticism she received, not for her poems but for being a female poet. Poetry and literature belonged to the men and so they critiqued her publicly and viciously, even if they privately admired her work. And so she disappeared from the list of of great Russian writers of the 19th century. A Double Life seems to rise from a lot of Pavlova's own experiences, but above all her love for poetry.

In A Double Life we get to know Cecily von Lindenborn, a girl growing up in the Russian elite. Her world has been so restricted to make her proper that to us she seems an almost stunted creature. As Pavlova writes:


'Now, at eighteen, she was so used to wearing her mind in a corset that she felt it no more than she did the silk undergarments that she took off only at night.'

She can only do as she has been told, except at night, when her mind unravels itself and spreads out in the most beautiful poetry. See, in A Double Life Pavlova brings together both prose and poetry, the latter used solely for Cecily's dreams. It is at night that she can rise out of her restraints and her dreams warn her of what is truly happening around her, how she is being played with and how truly unprepared she is for it. Initially I looked at Cecily as a silly girl, distracted and naive, until Pavlova's truth really hit home. This is how we raise girls, not knowing how restrained they are, unaware of the tests they're being set up to fail. A Double Life is heartbreaking, as Cecily's mind clamors at night while completely barred away during the day. She is set up for pain and doesn't seem to realize it until it is way to late. A Double Life is a feminist novel, even if that may not have been Pavlova's attention in mid-1800s. It's message that women suffer under repression, not just physically but especially mentally and emotionally. That not allowing them to express themselves truly cuts off a part of them. That having a daughter only to marry her off is cruel. And we know these things, but the fact that it hurts to read it means it is as true as ever.

Pavlova is a masterful writer. Although A Double Life is typical in many ways, following a young girl in love as she moves between social engagements towards a marriage, it goes much deeper. There is a sharp analysis of the society she is describing. An especially painful passage looks at the poorer relatives kept around as servants, desperate to stay near the glow of the rich. Pavlova finds that sore spot most of us have and isn't afraid to press it, which makes it even more outrageous her work was described as clinical and cold by her contemporaries. There is anger here, and pain, and a thirst for freedom of mind. A Double Life is a novel I will be rereading, often. From the soaring poetry to the honest prose, this is a brilliant, feminist even, novel that should be much more prominent than it is.

A Double Life blew me away in a way I hadn't expected. Set aside the dresses, the mansions and the carriages and you have a story about a girl who's mind is rebelling and in pain, who is unaware of what path she is on because she has never been taught to think of her life critically. A Double Life is an important and beautiful novel I would recommend to everyone.
Posted by Juli Rahel at 8/19/2019 09:59:00 am No comments:

Review: 'Never Have I Ever' by Joshilyn Jackson 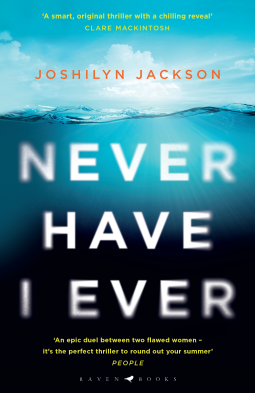 I spent much of last week at a beautiful beach in Vietnam and knew I would need a good beach read, the kind of book that gives you all the tension and all the twists and turns, while also not distracting you from the beautiful calm you're surrounded by. And Never Have I Ever was the perfect read for that. Thanks to Raven Books, Bloomsbury Publishing and NeGalley for providing me with a copy of this book in exchange for an honest review.


It starts as a game at a book group one night. Never Have I Ever... done something I shouldn't.

But Amy Whey has done something she shouldn't. And Roux, the glamorous newcomer to Amy's suburban neighbourhood, knows exactly what that is.

Roux promises she will go away. She will take herself and her son, who is already growing dangerously close to Amy's teenage stepdaughter, and she will go. If Amy plays by her rules.

But Amy isn't prepared to lose everything she's built. She's going to fight back, and in this escalating game of cat and mouse, there can be only one winner.

One of the things that stood out most to me in Never Have I Ever was the importance of diving to Amy, and no, this isn't a spoiler. Diving is something that she feels saves her and there are a few moments during Jackson's novel where Amy goes off and dives, surrounds herself with the calmness of the sea and decompresses. The reason these moments in the novel stood out to me is because it elevated Never Have I Ever above the usual shlocky suspense novel. Yes. the dramatic twists were still there, the novel was outrageous and nuts, but Jackson let her main character have moments to contemplate and to gather strength. In many of the novels the characters run around frantically, making move after move without ever really growing or even really establishing themselves. This means that they're easily forgotten after the book is finished, as we stayed with them only for the twists and turns. As Jackson gave her character the time to breathe, the reader breathes with her and I found myself caring much more about the outcome. I also really want to go scuba diving now.

Amy's good life is turned upside down when one day a new woman appears in her neighborhood, Roux, who seems to know everything. Either Amy will pay her with the savings she has left, or Roux will blow up the life Amy has built for herself. She decides to play, recognizing the satisfaction Roux gains from digging into other people's lives. What will she do? How far will she go? What is she willing to sacrifice? And how much more will be revealed? These are all the questions you want answered in a book like this and Jackson delivers. It takes a while to really get into Never Have I Ever, but the last third of the novel will have you gripped by the throat. I found myself caring for Amy more than I do for most of the protagonists in similar novels. Jackson explores the darkness and the desperation inside her, the deep love she feels but also the solid fear. You're invested as a reader because Jackson's focus on Amy makes the twists and turns seem a lot more realistic.

I hadn't read any of Joshilyn Jackson's previous novels so I came in completely new. What had really drawn me in was the blurb and knowing I would have time to really soak in the novel. The first few chapters of Never Have I Ever may feel slow but do set up the groundwork for the rest of the novel. There is a slow build up of tension around Roux, there is a growing awareness that Amy isn't as normal as she presents herself, and then there is constantly escalating game between Amy and Roux. The 'never have I ever' game of the novel happens in the first chapter, but the overall game is a lot darker. How far will either of them go? Where does this ability to lie and break others come from? Jackson infuses each scene with details ripped from life, which means that Never Have I Ever is very grounded for a mystery and suspense novel. Oddly enough, I wasn't too big a fan of the final twist of the novel, or rather the extent of that twist. I don't want to go into any details, but it felt like an odd step for a novel that had so far seemed very interested in that shade of grey between good and evil.

Never Have I Ever is a great suspense novel with high stakes and beautiful moments. It is sometimes a love letter to friendships and family, but also an exploration of desperation. I'd recommend this to those looking for a gripping suspense read.
Posted by Juli Rahel at 8/19/2019 08:30:00 am No comments: