Review: 'The Six: The Lives of the Mitford Sisters' by Laura Thompson 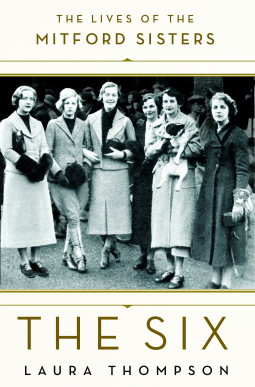 Non Fiction is a tricky genre because if the reader isn’t intrinsically interested in the topic up for discussion it takes an amazing author to make the reader care for their chosen topic. On the other hand, if the reader is interested then the author has to make sure not to bore their reader out of loving the topic. Luckily for Laura Thompson, I am easily fascinated by interesting historical ladies. Although I had never heard of the Mitford sisters before The Six, the blurb caught my eye anyway and I’m very glad to have been introduced to these six sisters. Thanks to St. Martin's Press and Netgalley for providing me with a copy of this book in exchange for an honest review.

The eldest was a razor-sharp novelist of upper-class manners; the second was loved by John Betjeman; the third was a fascist who married Oswald Mosley; the fourth idolized Hitler and shot herself in the head when Britain declared war on Germany; the fifth was a member of the American Communist Party; the sixth became Duchess of Devonshire.

They were the Mitford sisters: Nancy, Pamela, Diana, Unity, Jessica, and Deborah. Born into country-house privilege in the early years of the 20th century, they became prominent as “bright young things” in the high society of interwar London. Then, as the shadows crept over 1930s Europe, the stark—and very public—differences in their outlooks came to symbolize the political polarities of a dangerous decade.

The intertwined stories of their stylish and scandalous lives—recounted in masterly fashion by Laura Thompson—hold up a revelatory mirror to upper-class English life before and after WWII. The Six was previously published as Take Six Girls.

Biographies need a good subject. Although every life is interesting, not all of them make for a good book. Thompson didn’t have to worry about that since the Mitford sisters provide plenty of material. Living in the constantly changing 20th century, these six women were born into nobility and therefore into privilege. With a name and good looks, many doors were open to them despite their gender or the time they lived in. What makes them even more interesting is the different paths they chose, ranging from author, to socialite, to communist and fascist. Their story is also the story of 20th century England and Europe, of the decline of nobility and the rise of all kinds of ideologies, of the start of women’s rights. And all of this is enhanced by the glitter and glamour of the sisters’ celebrity.

Thompson runs into the same problem that many biographers do in The Six. Where do you start and how do you keep going? Birth might seem a natural beginning but unless you’re Mozart not a lot of interesting things happen in the first few years. Thompson starts The Six with a general discussion and introduction to the sisters, an overview of who they are and how the “Mitford cult” started. It makes for slightly confused reading at times, especially since confusing the sisters is a serious issue. What fascinated me the most were the close ties that a number of the sisters had with the Nazis, especially Unity who personally knew Hitler. It is this dark side of the sisters, covered in a sauce of English charm, which makes them fascinating.

There is a poignant relevancy to the sisters’ fascination with extreme ideologies. At a time where European teenagers from all walks of life run off to join ISIS in a bid to give their life meaning and do something “relevant”, it is both enlightening and terrifying to see that this isn’t something new. Thompson paints her six women with a sympathetic brush, trying to both show them for what they were while also showing their struggles. It can be difficult to read about the rich and fabulous having problems, but The Six does succeed in making the Mitford sisters feel like real women with real lives. There is something that feels English about country houses, dances, coming out balls and elopements, and it explains the continuing fascination with the Mitfords. They represent, in some way, a final hurrah of the upper classes, and they make for a fascinating read.

I give this book…

I really enjoyed The Six and how Thompson shines a critical yet kind light onto these six women. It would have been too easy to stereotype them or to completely follow the glossy celebrity image of the sisters. I'd recommend this to fans of Non Fiction, biographies and women's Writing.
Posted by Juli Rahel at 10/04/2016 08:07:00 am No comments: 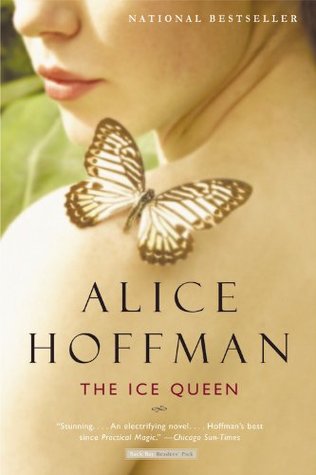 In the last few years I’ve read and reviewed a number of Alice Hoffman’s books, both recent and older. With each I discovered new things about her writing which drew me in, kept me on the edge of my seat and fascinated. Thankfully, The Ice Queen is no exception to that rule. Initially published in 2006, it was the title that put this book at the top of my ‘Alice Hoffman books I still have to read’-list.

From the bestselling author of Practical Magic, a miraculous, enthralling tale of a woman who is struck by lightning, and finds her frozen heart is suddenly burning.

Be careful what you wish for. A small town librarian lives a quiet life without much excitement. One day, she mutters an idle wish and, while standing in her house, is struck by lightning. But instead of ending her life, this cataclysmic event sparks it into a new beginning.

She goes in search of Lazarus Jones, a fellow survivor who was struck dead, then simply got up and walked away. Perhaps this stranger who has seen death face to face can teach her to live without fear. When she finds him, he is her opposite, a burning man whose breath can boil water and whose touch scorches. As an obsessive love affair begins between them, both are forced to hide their most dangerous secrets--what turned one to ice and the other to fire.

A magical story of passion, loss, and renewal, The Ice Queen is Alice Hoffman at her electrifying best.

The Snow Queen is a beautiful mix between a fairy tale and magical realism. Naturally the two fit together very well but it takes a skilled author to recognise the differences between the genres and make them tangible. Wrapped in a fairy tale structure, Hoffman tells a magical story about reality, about a normal life. Hoffman’s novel starts off with the nameless main character warning the reader about the power of words. A simple wish comes back to haunt her and for the rest of her life she trusts neither herself nor wishes. Her lack of name and her ability to see the large patterns of life makes Hoffman's main character a perfect substitute for the reader. She is me, you, us, the reader who thinks they know exactly how the story ends and yet can't stop reading. This kind of meta narrative, a novel which discusses reading, writing and words, can backfire unless it is willing to go deep and Hoffman is very willing.

At the heart of this story lies the story of those struck by lightning. Once Hoffman's main character is struck she partially rediscovers her desire for life. She loses the colour red and misses it more than she thought, she suddenly discovers the relative void in her life and aims to fill it. Introducing a set of characters who have also been struck, Hoffman is able to offer glimpses into different people's lives and how many preconceptions both we and they themselves have of themselves. A student who seems cocky and sure of himself is actually crippled by fear, a lady who seems to be the definition of suburban quietness actually has a backbone of steel. Throughout The Ice Queen Hoffman draws the reader's attention to how much people hide behind their facades, that nothing is as lost, or as won, as it may seem. At times this is heartbreaking, but there is also joy in these rediscoveries of lives.

One of the reasons why Alice Hoffman has become one of my favourite authors is her ability to create magic with her writing. Not only is her use of imagery stunning, but she also knows how to string together sentences with a punch, to set up plot points early on that resolve themselves at the perfect moment and unravel characters one sentences at a time. It is especially the latter which draws me personally to Hoffman, since many of her novels focus on women. Unfortunately it is still rare to find a writer so willing to explore female characters, and especially female characters post-teenage years. Hoffman's main character is difficult, at times almost cruel, full of love and terrified. It's a joy to read and feel along with her character.

Some novels leave a void after they're finished and when The Ice Queen finished I wasn't quite sure what to do with myself. Hoffman's writing is magical and she is one of the best contemporary authors we have. I'd recommend this to anyone interested in Fairy Tales, Magical Realism and Women's Writing.
Posted by Juli Rahel at 10/02/2016 09:51:00 am No comments: