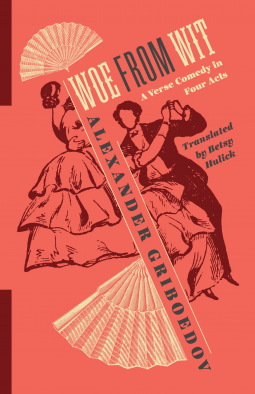 It was The Master & Margarita that first, truly, brought Russian literature and its potential for irreverence, absurdity and (not so-) disguised social commentary to my attention. From there I expanded to the more classical texts such as Pushkin’s Onegin (love at first read) and Tolstoy’s War and Peace (merely whelmed). Thankfully there are publishers out there, such as Columbia University Press’ ‘Russian Library’ project and Pushkin Press, which continue to shine a spotlight onto great, newly translated literature. Woe from Wit is definitely an addition to this. Thanks to Columbia University Press and NetGalley for providing me with a copy of this book in exchange for a review.

Alexander Griboedov’s Woe from Wit is one of the masterpieces of Russian drama. A verse comedy set in Moscow high society after the Napoleonic wars, it offers sharply drawn characters and clever repartee, mixing meticulously crafted banter and biting social critique. Its protagonist, Chatsky, is an idealistic ironist, a complex Romantic figure who would be echoed in Russian literature from Pushkin onward. Chatsky returns from three years abroad hoping to rekindle a romance with his childhood sweetheart, Sophie. In the meantime, she has fallen in love with Molchalin, her reactionary father Famusov’s scheming secretary. Chatsky speaks out against the hypocrisy of aristocratic society—and as scandal erupts, he is met with accusations of madness.

Woe from Wit was written in 1823 and was an immediate sensation, but under heavy-handed tsarist censorship, it was not published in full until forty years later. Its influence is felt not just in Russian literary language but in everyday speech. It is the source of a remarkable number of frequently quoted aphorisms and turns of phrase, comparable to Shakespeare’s influence on English. Yet owing to its complex rhyme scheme and verse structure, the play has frequently been considered almost untranslatable. Betsy Hulick’s translation brings Griboedov’s sparkling wit, spirited dialogue, and effortless crossing of registers from elevated to colloquial into a lively contemporary English.Alexander Griboedov (1795–1829), described by Pushkin as the “cleverest man of his generation,” is best known as the author of Woe from Wit. While serving on a diplomatic mission to Persia in the aftermath of the 1826–1828 Russo-Persian War, he was brutally murdered when a mob assaulted the Russian embassy in Tehran.

Betsy Hulick has translated Russian poets and playwrights, including Pushkin and Chekhov, and her translation of Gogol’s Inspector General was produced on Broadway.

Woe from Wit, according to this edition’s introduction, is still frequently quoted by Russians in their everyday life. When asked what the time is, those without watches will say that “no one happy minds the clocks” and Chatsky’s speech brings us the phrase “and who are the judges?”, letting us question who dictates what we should do and why. I’m always amazed by the influence of plays on out culture. You see it now with films and series which are quickly picked up by popular culture but also very quickly dropped again. Only a few end up giving voice to a sentiment that endures, but as long as the sentiment endures, so does the play that voiced it. Woe from Wit gives voice to many things, especially the frustration of a younger generation of men in 10th century Russia, who traveled abroad and adopted more progressive ideals than those at home. This clash, although with comedic timing, is present throughout Woe from Wit and it leaves our Romantic protagonist frustrated. These frustrations end up later leading Russia into the Decembrist Uprising of 1825 and, of course, the Russian Revolution.

In Woe from Wit, a young man, Chatsky, returns to Moscow from abroad, hoping to reconnect with his former love. Unfortunately, Chatsky finds a Moscow, and a beloved, that has changed and grown while he was away. She has moved on and will no longer greet him with the same enthusiasm and devotion, while Moscow itself is now full of quick judgements, nepotism, and a fear of radicalism. Of course, everything coming out of Chatsky’s mouth is seen as revolutionary and upsetting. Woe from Wit is a comedy, but one that has a keen eye and a sharp tongue. Much can be found to criticize, whether it is the job security of the maid depending on keeping her mistress’ secret, the father who grovels before all, the Princess whose own racism she only ever allows to be adorable, and the clerk who understands the safety of being meek and mild. Chatsky himself bursts onto this scene of carefully played personas and carefully established mores with a distaste for all, and although the consequences are comedic, they are also tragic. The title itself is also key to understanding this balance between comedy and tragedy within the play. 'Wit' is usually something we associate with fun and laughter, being adored by the crowd around you for your quick tongue. In Chatsky's case, his cleverness and way with words sees him scorned by those around him who are either not quick enough themselves or dislike being the object of mockery. It also allows the reader/observer of the play to question whether Chatsky's wit does him any good. Perhaps he is morally above the other characters, but perhaps he is also a little cruel in his mockery.

This is my first time reading anything by Griboedov, but I greatly warmed to the quick wit and sly judgment on display in Woe from Wit. The quick repartees between different characters, especially Chatsky and Sophie, are a joy to read and made me long to see the play performed. The array of characters and their idiosyncrasies they all display are a joy to read, even as Chatsky remains a solid protagonist. It is important to read the Introduction, however, since it provides a good context for the play and its twists and turns. It is absolutely possible to read and enjoy the play without, but the added depth of the context really brings some of the play’s elements to life. Betsy Hulick, who is a part of Columbia University Press’ ‘Russian Library’ project, produces a great translation that allows for easy reading, while maintaining a rhythm and a rhyme that makes this Russian play feel familiar to an Anglophone audience used to Shakespeare.

Before I end this review, I do want to heap a little bit of praise onto the ‘Russian Library’ project itself. I’ve read a few of their translations so far and many of them, such as A Double Life by Karolina Pavlova, trans. by Barbara Heldt, were immediate hits with me and introduced me to a whole new way of writing. It’s definitely a project I will be keeping an eye on in the future.

I give this play…

Although reading plays may not be for everyone, I would recommend that those with an interest in Russian literature and history give Woe from Wit a chance. Not only was the play in and of itself crucial to the development of Russian drama, it also provides a fascinating insight into the frustrations of Russian youths that influenced and caused major historical and societal changes.
Posted by Juli Rahel at 4/23/2020 02:46:00 am 1 comment: