Review: 'The Sister' by Louise Jensen 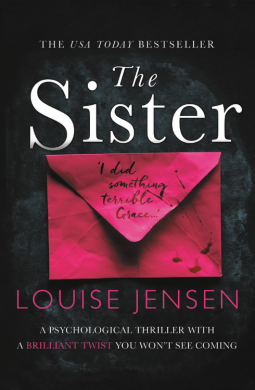 Ominous last words, a friendship that may not have been what it seemed, and a new friend who is suspicious. These are a few of my favourite things and The Sister employs most of them to great effect. Moving between the past and present, Jensen's The Sister sketches a portrait of a woman on the brink, trying desperately to claw her way back. Thanks to Grand Central Publishing and Netgalley for providing me with a copy of this book in exchange for an honest review.

"I did something terrible Grace. I hope you can forgive me..."

Grace hasn't been the same since the death of her best friend Charlie. She is haunted by Charlie's last words, and in a bid for answers, opens an old memory box of Charlie's. It soon becomes clear there was a lot she didn't know about her best friend.

When Grace starts a campaign to find Charlie's father, Anna, a girl claiming to be Charlie's sister steps forward. For Grace, finding Anna is like finding a new family, and soon Anna has made herself very comfortable in Grace and boyfriend Dan's home.

But something isn't right. Things disappear, Dan's acting strangely and Grace is sure that someone is following her. Is it all in Grace's mind? Or as she gets closer to discovering the truth about both Charlie and Anna, is Grace in terrible danger?

There was nothing she could have done to save Charlie... or was there?

At the heart of The Sister is friendship and guilt. Like many other current psychological thrillers The Sister is fascinated with the adolescence of teenage girls, the highs of friendship and the lows of betrayal. The friendship between Grace and Charlie centres the novel and is the relationship around which most of it revolves. Thinking back to my own adolescence and childhood I do remember the intensity of the smallest thing, so seeing the almost obsessive nature of the friendship and of Grace's questioning of it does make sense. Jensen does take it a step further by looking at guilt and its many different forms. We all carry some guilt around, whether it's regretting something we did or regretting something we didn't. The Sister shows this in different ways and in different relationships, between children and parents, husband and wife, friend and friend. Where is the line and what happens when it's crossed? I know there are a lot of questions here, but who doesn't love a book that asks questions?

At the beginning of The Sister we find Grace slowly trying to recover from her best friend's death, but as she tries to do so the past comes back to haunt her and her life slowly begins to fall apart again. I did enjoy much of The Sister, its twists and its turns, but whereas some things remain a mystery to Grace, I feel the reader figures some things out way quicker than she or any of the other characters do. Especially Anna was both fascinating and frustrating since she was rather untrustworthy from the beginning. Part of this is also down to the title. I mean, come on. I don't want to spell it out but surely we all know that titles like these can be major giveaways unless they're actively misleading or only suggestive. Think of Rebecca by Daphne Du Maurier. Rebecca is at the heart of the novel, centring the mystery, and Du Maurier wants you to be just as focused on her as her main character. In this case Jensen's title isn't as successful, unfortunately.

Louise Jensen knows how to keep the pace. When a novel switches back and forth between the present and the past, it's difficult to make sure both narratives keep a reader's attention. Jensen uses Grace's past as a way to both inform the present and confuse it. What happened? Why did it happen? And how long will the repercussions last? Grace's voice is strong throughout the novel, even if at times she isn't the most likeable of narrators. Jensen doesn't intend for her to be though, not shying away from showing that no one is perfect and everyone has their vices. In the end The Sister tries to show that forgiveness needs to happen and that this forgiveness can hide behind different and surprising corners. Despite the fact that not all of The Sister was as surprising or smooth as I would have liked, I did enjoy it and raced through it, heading towards the inevitable but juicy conclusion.

I enjoyed The Sister, even though it was quite obvious at times where it was going. However, there were some great scenes which offered a lot of promise so I will definitely keep my eye out for Jensen's next book.
Posted by Juli Rahel at 8/12/2018 01:28:00 pm No comments: 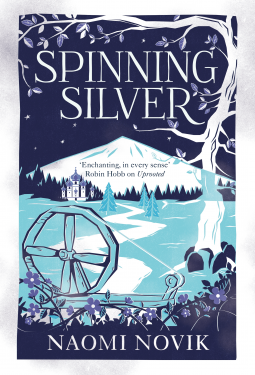 A fairy tale adaptation you say? Set in a magical cousin of \Russia? Yes of course I'd love to read this, why haven't you given it to me yet?! Spinning Silver promises a lot of good things in its blurb, but I'm happy to say that what it actually has to offer is a lot better than what is promised. Novik spins a magical web, slowly ensnaring the reader until they realise they're in too deep to get out. Thanks to Pan Macmillan and Netgalley for providing me with a copy of this book in exchange for an honest review.

WILL DARK MAGIC CLAIM THEIR HOME?

Miryem is the daughter and granddaughter of moneylenders, but her father’s too kind-hearted to collect his debts. They face poverty, until Miryem hardens her own heart and takes up his work in their village.

Her success creates rumours she can turn silver into gold, which attract the fairy king of winter himself. He sets her an impossible challenge – and if she fails, she’ll die. Yet if she triumphs, it may mean a fate worse than death. And in her desperate efforts to succeed, Miryem unwittingly spins a web which draws in the unhappy daughter of a lord.

Irina’s father schemes to wed her to the tsar – he will pay any price to achieve this goal. However, the dashing tsar is not what he seems. And the secret he hides threatens to consume the lands of mortals and winter alike.

Torn between deadly choices, Miryem and Irina embark on a quest that will take them to the limits of sacrifice, power and love.

In this fairy tale-inspired novel, Naomi Novik weaves a rich, multi-layered tapestry that is a joy to read.

The main reason I picked up Spinning Silver is because the blurb calls it 'fairy tale-inspired'. I love new, modern takes on fairy tales that explore what is at the heart of those tales and why they are still relevant to us now. Spinning Silver does this at the very start, revealing that behind the fairy tale of Rumpelstiltskin there is a very different truth. And so Novik sets the reader on an early path to both mistrust what is at the surface and suspect what lies underneath. It makes for a great set up to exploring the lives of her many characters, and especially the three girls at the heart of the novel, Miryem, Irina and Wanda. And this is where I need to take a moment to complain about the blurb above for this novel. The reason I included it in the review is only to be able to complain about it now. After having read the book I feel the blurb does it a major disservice. Not only does it leave out Wanda as a major character, it misses out of providing hints at the genres the book mixes together and gives no suggestion of the richness of the book itself. So as I said in my introduction above, consider the blurb only a pale reflection of the actual book. In this review I'm going to try and avoid covering too much of the plot because I loved the surprises it offered me.

As stated, at the heart of Spinning Silver are Miryem, the daughter of Jewish moneylenders, Irina, the daughter of a duke who had hoped for more, and Wanda, the daughter of a drunk and poor farmer. Part of why I was so annoyed that the blurb gave no hint of all three is because it is by bringing together their diverse stories that Novik really caught my attention. Miryem's family is poor because her father is no good at moneylending, but one day Miryem has had enough of the sly smiles, the withheld money and the comments about their Jewish heritage, and takes over from her father. Fueled by her anger, Miryem quickly makes her family's life more comfortable. Alongside this we are told of Wanda, who lives with her two brothers and father on a barren farm, "protected" only by her mother's tree. Through Miryem Wanda is given a chance at escape, understanding and maybe even the magic of letters. As Miryem's power to "change silver into gold" becomes more well-known, she draws the eyes of a people shrouded in myth and fear, catching up Irina in the turmoil as well. Irina has lived her life in the shadows, almost content at being a disappointment to her father, until he sees a chance to make her tsarina. Her elevation brings with it strength and danger, and, like Miryem and Wanda, she has to find a way to save what she loves and come into her own. Novik takes her three main characters and highlights both the differences and similarities between them. Whether it's their difference in class and ethnicity or their shared stubborn determination and quiet love for their family, Novik's Spinning Silver shows them in a gentle but honest light and I couldn't help but become engrossed in all of them.

Novik's writing is what brings Spinning Silver to life. She translates the sparse but powerful style of fairy tales into a more luscious and rich style, without losing the clarity and honesty. I loved both her descriptions of the grand  landscape and of the small moments between family members that show their love for each other. Spinning Silver moves skilfully between being loud and being quiet, being dramatic and being intimate. It means that I found myself, reading during my lunch break at work, completely lost in her world. I looked up from my Kindle an hour later and had forgotten I was at work. For the rest of the day I had Spinning Silver in my mind and I returned to reading the moment I got home. I was surprised that certain aspects of the novel worked for me. Novik moves a lot between different narrators, and not just her three main female characters. Yet each time there is a new character speaking their narration adds another layer to the story and it didn't feel like too much. In a sense the ending also came too soon and tied up all the loose story lines almost too neatly, but I guess now I'm just really looking for something to complain about. I will definitely be keeping my eyes out for more of Novik's novels.

I adored Spinning Silver. Once I was caught there was simply no escape. Novik weaves a beautiful tale of three interlocking stories, three girls with different paths yet similar desires, all set against a beautiful, Russian fairy tale-esque background. What more could you really ask for?
Posted by Juli Rahel at 8/01/2018 03:16:00 pm No comments: