We are studying Patricia Highsmith's 'The Talented Mr. Ripley' for A-levels and somehow everyone seems to think that Tom Ripley is gay. I disagree.

One of the main scenes that the "pro-gay interpretation group" use as evidence is the scene where Tom puts on Dickie Greenleaf's clothes, impersonates him and imagines killing Marge. However, I do not think he did this because he is in love with Dickie and therefore jealous of Dickie and Marge's relationship. I think that the only reason Tom wants to impersonate Dickie is because as Dickie the world is open to him. However, Tom, in my opinion, is asexual, rather than straight or homosexual. Sex is disgusting to him and he only looks at men because it enables him to impersonate their behaviour if necessary. I think the drive behind his anger is the fact that he is unable to impersonate the sexual aspect of Dickie's life and that someone else is apparently so good at reading Dickie's mind and controlling him. Therefore in a sense it is possessiveness that drives Tom in this scene, but the idea that he could not impersonate Dickie or be like him is what truly infuriates him.

Strangely enough I think that Tom dressing up as Dickie and then "killing" Marge is not Tom wanting to have Dickie to himself but is Tom making "Dickie" act like Tom thinks he should. Tom does not think that this sexual side of Dickie's personality is necessary or in any way positive and wants Dickie to see this as well.

How Fiona Macleod was born

Three days ago I bought a book. In itself, this is nothing special. What intrigued me about this book however was not only the title (The Winged Destiny: Studies in the Spiritual History of the Gael) but the fact that the author's name was in double quotation marks. Why, I asked myself.


"Fiona Macleod" was William Sharp's pseudonym, which he kept secret for most of his life. This second identity was born in 1891, after he had an extramarital affair with Edith Rinder. According to some his pseudonym was a reflection of his confused sexual identity whereas others argue it was a pseudonym for work that was inspired by Edith Rinder. These works were the ones that were not only financially successful but also made him one of the defining writers of his era. Towards the end of his life he was also involved, it is said, in esoteric cults such as The Hermetic Order of the Golden Dawn. More on this in this very interesting article: William Sharp and the Esoteric Order.

Born in 1855, William Sharp must have been aware of female writers who chose male pseudonyms, such as Mary Anne Evans 1819-1880 (= George Elliot) or Charlotte Bronte 1816-1855 (Currer Bell). Women chose these pseudonyms, afraid their works would not be accepted by the literary community otherwise. Interestingly, W.B. Yeats found Macleod's works more interesting than Sharp's, until he found out about the pseudonym. I wonder why Sharp felt the need to write under a female pseudonym. I think that perhaps he felt he could not be as expressive as a man as a woman was perhaps allowed to be. I have been reading the book (a collection of amazing Gaelic tales) and the language is very intrinsic, detailed and flowery and in my mind I always get the image of a female writer.

I thought it was quite interesting to share this with you. What do you think?


The Follow Friday and Book Blogger Hop questions aren't that interesting this week so I decided to go a bit wild.

If you have checked out my blog before you might remember this one: What To Do In The Weekend: Scriptwriting. Just to recap shortly: I have taken it upon myself, with some help from the family, to create a 4-movie script out of my favourite two childhood books: Brief aan de Koning and Geheimen van het Wilde Woud. Its protagonist, Tiuri, has to deliver a letter to the king of Unauwen, but the Black Knight is trying to stop him at all costs. In this post I had outlined two different locations for the two different kingdoms. I think it is good to have an image in your head when you are writing. 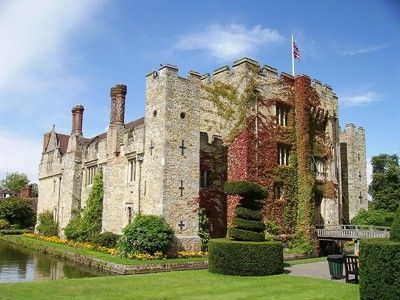 One of the most beautiful locations in the book is Isadoro's castle. Isadoro is a beautiful Lady whose loyalty unfortunately falls on the wrong side of good. Her castle is described beautifully and especially her gardens are amazing. Yesterday I was waiting in a hotel lobby, do not ask me why, when I found a flyer for Hever Castle.

It has a moat, which would be perfect to withstand the siege in the last movie. There is wood on the inside, which fits the book and i like to be true to the book. What would make this castle perfect as well is its history. Anne Boleyn grew up here and she if anyone was a strong woman it was her. Now, for the gardens: these are simply beautiful. The roses would be perfect to represent Isadoro's character since she can be quite stingy. Overall, this seems to be the perfect castle for me or for Isadoro really.

David Lodge's 'The Art of Fiction'

I have just finished David Lodge's 'The Art of Fiction' and it was very enlightening. Although I was familiar with most of the literary devices he explains, such as the epistolary novel and pathetic fallacy, it is hard to find a compact synopsis of them with good examples. I just wanted to highlight some of the chapters and explain thoughts that arose to me while reading the book. Chapter 30 is on Symbolism and David lodge used an excerpt from Lawrence's 'Women in Love'. This made me reflect on Lawrence as a writer and it came to me he has a strong liking towards animals, in particular horses. In this excerpt he describes how the mare 'spun and swerved like the wind, and yet could not get out of the grasp of his will'. This, for me, was a striking resemblance to his novel 'St Mawr'. In this novel Lou Witt is entranced by a powerfull stallion called St. Mawr who seems to represent all the masculinity and vitality men are missing in her opinion. She is almost forced to realise that 1920s England is not her place. In the excerpt from 'Women in Love' the mare is supressed by Gerald Critch, who is forcing her to face industrialisation, represented by a locomotive. I thought it was striking how similar these two scenes are although their respective books were published 4 years apart. It can be concluded that Lawrence saw the animal as a strong symbol of life.

In the book each chapter is dedicated to a literary device. My "favourites" were Chapter 8: Names, Chapter 21: Intertextuality and Chapter 24: Magic Realism.

Chapter 8 focusses on names and the reason I took an immediate interest to the chapter was that in one of my Dutch exams I once got the question what Emily Bronte had been thinking when she named her protagonist Jane Eyre. I was baffled since this had never been discusse din class. However, after some brainstorming, quick brainstorming I may add, I came up with the following:

Jane is a very common and ordinary name in English. The expression 'plain Jane' might be suitable to describe Jane Eyre and therefore perhaps her first name was represent her commonness in her looks and social position that seperate her from Mr. Rochester and her family. However, her last name, Eyre, is exotic, outlandish. I thought that perhaps this told us something about her character, something that is not quite usual in young women of her position.

David Lodge said that 'in a novel names are never neutral.' I completely agree, even thought often the meaning of a name is hard to find. Some names can be very easily linked, such as names from the Bible. If a character is names Eva there are a whole lot of possible connotations that can add to your character. I have started writing a story in which the protagonist is named Eva and she is looking back on her fall from grace, so to speak. Obvious connection, n'est pas?

Chapter 21 on intertextuality is very interesting on many different levels. First of all, all authors copy each other in some way, e.g. Virgil copied Homer's writing style in the Aeneid but I do not blame him. Something that has become clearer to me over the years for example is how much inspiration Tolkien got from the Prose and Poetic 'Edda', from 'The Nibelungen' and others. Some names are heavily influenced if not copied, which links back nicely to the paragraph above, but it is mainly themes that we can recognize. The question that formed in my mind however was: how far is this copying other authors or are these themes, such as death, loyalty, betrayal and love, simply human and therefore come from each author independently?

Of course intertextuality mainly has to do with linking back to different books in your own story. The example David Lodge gives in the book is the correlation between Joseph  Conrad's 'The Shadow Line' and Coleridge's 'The Rime of the Ancient Mariner'. However, there are more obvious examples, such as James Joyce's 'Ulysses', where the intertextuality starts with the title.

Chapter 24 is on Magic Realism and this is a style of writing I particularly like. As David Hume said 'humans love the fantastical' and often the impression an experience gives us cannot be described through purely realistic use of language. Sometimes the impossible is the best way to describe the possible. David Lodge uses Milan Kandera's 'The Book of Laughter and Forgeting' as an example and in the excerpt a circle of dancing people takes of and flies away while the narrator is left behind. It is obvious this cannot happen, but the feeling of isolation, alienation and loneliness is all the more poignant and it is beautifully described.