Review: 'In the Beginning was the Sea' by Tomás González, trans. Frank Wynne 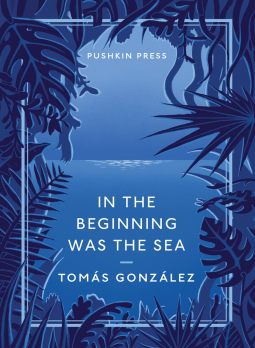 I picked this novel up on a whim after reading the blurb. There was something fascinating about it and the idea that it was based on a true story also intrigued me. I am incredibly happy to have picked up this novel and discovered a new author for myself! Thank you to Netgally for providing me with a free copy of this novel.


The young intellectuals J. and Elena leave behind their comfortable lives, the parties and the money in MedellÃ­n to settle down on a remote island. Their plan is to lead the Good Life, self-sufficient and close to nature. But from the very start, each day brings small defeats and imperceptible dramas, which gradually turn paradise into hell, as their surroundings inexorably claim back every inch of the 'civilisation' they brought with them. Based on a true story, In the Beginning Was the Sea is a dramatic and searingly ironic account of the disastrous encounter of intellectual struggle with reality - a satire of hippyism, ecological fantasies, and of the very idea that man can control fate.

Pushkin Collection editions feature a spare, elegant series style and superior, durable components.Â The Collection is typeset in Monotype Baskerville, litho-printed on Munken Premium White Paper and notch-bound by the independently owned printer TJ International in Padstow. The covers, with French flaps, are printed on Colorplan Pristine White Paper. Both paper and cover board are acid-free and Forest Stewardship Council (FSC) certified.

In the Beginning was the Sea is a really interesting read. On the one hand the reader is kept on the outside, observing J. and Elena as they live, and ruin, their lives, while on the other hand the reader can't help but become affected by what they do. J. and Elena buy their farm, or finca as it's referred to in the book, and want to live a life away from the materialism and fakery of the materialism that surrounded them in the city. Naturally, things don't go as they had planned. González has the ability to write about the nastiness of humanity and life in a tone that is beautifully calm, making the tragedy of his characters seem both inevitable and due to willfulness. A major part of this novel is the idea of reinventing yourself, of choosing a new lifestyle and adapting to your surroundings. The novel plays with the way in which the story of J. and Elena is told which presents the reader with a sense of doom about their journey.

There is something about In the Beginning was the Sea that doesn't feel comfortable. González was inspired for this book by his own brother's life, yet the book is largely devoid of overt sentimentality. There is something almost cruel in how the narrator deals with his characters, the lassitude with which he pictures their rise and downfalls. The reader knows much more than the characters do and as a consequence the book almost feels like a detective novel at times. The ending is, if not clear, at least expected, and it's fascinating to see how González works his way towards the end at his own leisure. The contempt shown by the main characters is one that is returned to them and in the end the reader is simply left wondering how it got to this.

Despite this being González's first book, the writing is stunning and has a clear voice. His descriptions of the finca and of the sea are beautiful and emotive and more than anything bring out the ecological fantasies of the main character. What I really enjoyed was how he would foreshadow certain events but then not reveal anything about them. González manages to keep the reader right on the edge while bathing them in beautiful imagery and writing. Frank Wynne does an amazing job at translating González's prose. Especially enjoyable were the words he left in Spanish, such as 'finca' and 'hermana', which added a lot of flavor to the book. For a long time he was known as 'the best-kept secret of Colombian literature', but it is long overdue that his books are being translated.

In the Beginning was the Sea is a novel that I won't quickly forget it. Reading it was almost addictive in a strange sense and after finishing it I still hadn't made up my mind about it. It will keep you on the edge of your seat for as long as it lasts, largely due to González's stunning prose. The book will leave you with questions but also with a sense of understanding which is hard to explain. I would recommend this to fans of realist and Spanish fiction.