Follow Friday and 'The Heir of Redclyffe' by Charlotte M. Yonge

I haven't done half of what I planned to do this week but I'm just going to hope Fate carries me through! Please Lord... Anyways, it is also Friday which means there's some great memes out there which you can join in today! The first one is Follow Friday, hosted by Alison Can Read and Parajunkee. This week's question was suggested by The Paperback Princess:

How did you  come up with your blog title and address? Does it have a special meaning for you?

Great question! Initially I started my blog as a way to write down some of my thoughts on the books I read for school. I chose the name because I realized there were so many books out there that I hadn't read or even heard of. For me, the title works on two different "levels". On the one hand, there is a whole "universe" out there which is full of books and stories which I want to read. When I see my blog title it reminds me to expand the search for my next read to include something different. On the other hand, words can craft whole universes. Authors create lives, galaxies and beauty through words and I never want to forget how magical words are.

Does the title of a book make or break your choice to read it?

I wouldn't say a book's title is a 'make or break' factor, yet I have to admit that if a title is utterly dreadful I am less likely to pick a book up. Wait.... let me start again. Although a title isn't necessarily a 'break' factor, it is most definitely a 'make' factor. If a book has an intriguing title I will definitely pick it up and read the back. It is one of the first things that grabs my attention. Also, and this is slightly awkward to admit, if a title is terrible I might be to embarrassed to talk about it, in which case I won't be mentioning it to anyone!

This week I'm using another 100 Classics read which I have wanted to start for quite some time. It's The Heir of Redclyffe by Charlotte M. Yonge. 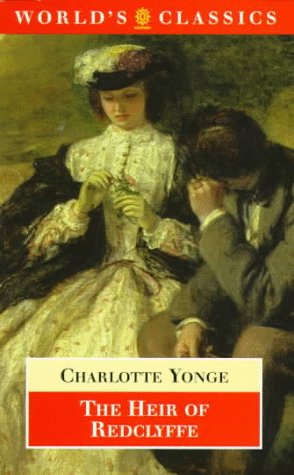 First published in 1853, The Heir of Redclyffe was among the most successful novels of the century, equalling even the work of Dickens and Thackeray in popularity. The story of a clash of personality between well-born cousins, Guy Morville and Philip Edmonstone, the plot focuses on Guy's spiritual struggle to overcome the darker side of his nature. Philip's sinister insinuations about Guy's character almost thwart Guy's marriage to the gentle Amy, yet despite their bitter feuding the novel reaches an unexpected and dramatic conclusion that vindicates romantic virtue, self-sacrifice, and piety, epitomizing the period's nostalgia for an idealized chivalric past. Adopted by William Morris and Burne-Jones as 'a pattern for actual life', Guy was a popular role model of noble virtue, while Amy is the ideal Victorian wife - redeemer and inspirer, support and guide. The Heir of Redclyffe is a virtual paradigm of the trends of thought which characterized the middle decades of the nineteenth century. It is deeply marked by the influence of the Oxford Movement, an aspect explored by Barbara Dennis in her Introduction to this unique critical edition.


'The drawing-room of Hollywell House was one of the favoured apartments, where a peculiar air of home seems to reside, whether seen in the middle of summer, all its large windows open to the garden, or, as when our story commences, its bright fire and stands of fragrant green-house plants contrasted with the wintry fog and leafless trees of November. There were two persons in the room - a young lady, who sat drawing at the round table, and a youth, lying on a couch near the fire, surrounded with books and newspapers, and a pair of crutches near him.' p.3

I like this beginning. Setting is majorly important for me and when a novel is quite clearly centred around a house I like getting a feeling for the place. I like Yonge's description of the house and how she shows it to us in different seasons.


'"He expostulated with all his might; but at nineteen he could do little with a determined sister of twenty-seven; and the very truth and power of his remonstrances must have made it leave a sting."' p.56

I feel slightly sorry for this younger brother since he should not have to try and convince his sister. On the other hand, this woman should be able to do as she pleases. I feel like this book will get me quite worked up.

So, that is my post for today! How important are titles to you? And what was the inspiration for your blog title?
Labels: 100 Classics A Universe in Words Blog Book Beginnings Book Blogger Hop Charlotte M. Yonge Follow Friday Friday 56 reading The Heir of Redclyffe Titles