This week I have been trying to focus on work and university work but I've still managed to get some reading and blogging in though so yaay me. I also have a question, one which I feel like I should bold! I want to potentially host a giveaway of sorts for people in the UK, where I put up a list of books and if you want one you comment and I'll put it aside for you. Does this sound good? Anyone be up for that? I realize a lot of you are from the US or elsewhere, but I simply can't afford to send books all over the world :( Let me know what you think!


Follow Friday is hosted by Alison Can Read and Parajunkee. This week's question was suggested by Journey Through Fiction:

This is a torturous question since I don't have £100,000. What I probably would do was put aside some money for my Masters, my PhD and my sister's Bachelor degree. That would be a sensible thing to do and definitely would have some money left afterwards. If I got it NOW I might try to buy a ticket to the Star Wars Celebration in Anaheim, since they released a new teaser trailer yesterday and I basically need to be there. After that I might save some money to later invest into a house that has a library space!

Ending a book I loved is sad and beginning a new one is apprehensive for me. What about you?

Aaah, I definitely recognize this apprehension Elizabeth! I recently finished The Awakening by Kate Chopin and it really gripped me. When I actually read the last page and put it to the side I wasn't quite sure what to pick up next and how to get into it if my mind was still buzzing with The Awakening. Usually when this happens to me I simply have to "tough it out" for a few pages, by which I mean that I simply have to start reading the next book and wait until it grips me. Usually it does happen after maybe the first chapter, but what also helps is to maybe take some time off reading if a book has really shook you. 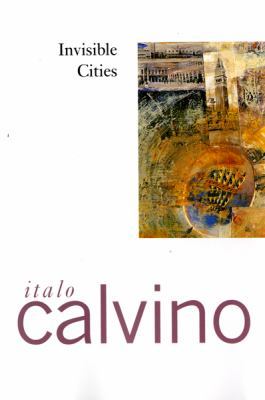 This week I'm using a book which I've borrowed from my step-mom (thanks!) which I have been wanting to read for ages! This book is Italo Calvino's Invisible Cities!


“Cities, like dreams, are made of desires and fears, even if the thread of their discourse is secret, their rules are absurd, their perspectives deceitful, and everything conceals something else.” — from Invisible Cities


'Kublai Khan does not necessarily believe everything Marco Polo says when he describes the cities visited on his expeditions, but the emperor of the Tartars does continue listening to the young Venetian with greater attention and curiosity than he shows any other messenger or explorer of his.' p.5 (first page)

I love the frame story of Kublai Khan, I think he is a really interesting figure and who doesn't love Marco Polo? Calvino's writing is beautifully descriptive and imaginative. I can always "see" what he is trying to say!


'When he enters the territory of which Eutropia is the capital, the traveler sees not one city but many, of equal size and not unlike one another, scattered over a vast, rolling plateau.' p.56

I love the whole idea of this novel, a collection of travel stories which show us how humanity works. Besides that, it is simply stunning prose and wickedly funny and sharp at times.

So, what would you do with £100,000? And can you pick up a new book straight after really loving one?