Review: 'The Great Zoo of China' by Matthew Reilly 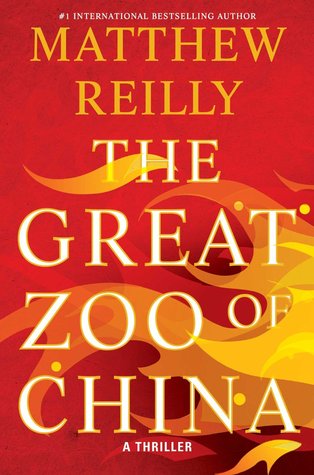 A grand, mysterious zoo with magnificent and astonishing creatures that have never graced our zoos before? Who wouldn't want to read more about that! Matthew Reilly's novel fascinated me as soon as I read the blurb on Netgalley. This review could be considered to have SPOILERS!


It is a secret the Chinese government has been keeping for forty years. They have found a species of animal no one believed even existed. It will amaze the world. Now the Chinese are ready to unveil their astonishing discovery within the greatest zoo ever constructed.

A small group of VIPs and journalists has been brought to the zoo deep within China to see its fabulous creatures for the first time. Among them is Dr Cassandra Jane ‘CJ’ Cameron, a writer for National Geographic and an expert on reptiles.

The visitors are assured by their Chinese hosts that they will be struck with wonder at these beasts, that they are perfectly safe, and that nothing can go wrong.

Of course it can’t…

GET READY FOR ACTION ON A GIGANTIC SCALE.

The subtitle to this book is 'a thriller' and I hadn't quite considered how scary and exciting this novel would be. I was thrilled to the max by The Great Zoo of China. Reilly kept the pace high throughout the novel while keeping the amount of time passed relatively realistic. Only so much can happen within a few hours and no matter how badly you want to get to the next action scene, you have to allow your characters a break every once in a while. In some ways reading The Great Zoo of China feels like watching a film. Each action sequence is described incredibly vividly and with a great eye for detail. Sometimes novels carry their action too far, describe the violence and the blood shed in a way that seems to miss the point. Reilly manages to retain the sense of horror while also capturing the sense of excitement and adrenaline that comes with action scenes. Although the ending could have done with a bit more exposition, The Great Zoo of China is a thrill-ride from beginning to end.

For me the main strength of this novel was its amazing main character. Cassandra Jane "CJ" Cameron was a kick-ass, female lead with the brains to actually realistically survive whatever the novel throws at her. I enjoyed being able to read about a woman who was older than me for once and to have her narrative revolve around her skills, rather than her attractiveness or "cooky-ness". From the get-go, Reilly establishes CJ's character as focused and determined. Once the proverbial shit hits the fan the reader isn't surprised that CJ takes control and knows what's happening. It was interesting how glad I was to read about such a fascinating female character because my enthousiasm about her shows how refreshing she is. Besides her being interesting on her own, her interactions with the other characters really helped uplift the novel, She was never put down for being female and her knowledge was never questioned by the men around her. At times I regretted that there was no other major female character, but the female side-characters still made up for it.

Set in China, most of the characters were still American. I was worried that Reilly wouldn't take advantage of the zoo's position but thankfully he picked that up halfway through the book. There were Chinese characters who were crucial to the development of the plot and Chinese culture itself played a large role as well. Here is another SPOILER warning so consider yourself truly warned for the next few sentences! The animals in this new zoo are dragons and initially I was wondering how Reilly would take such fantastical creatures and make them believable. By linking his dragons in with legend and biology there is enough about them that is true to make their mere existence at least potentially possible. I loved reading about the dragons and was really happy with some of the twists and turns Reilly introduced halfway through the book.

The Great Zoo of China was a fascinating read. From its great lead to its fast-paced action scenes the novel makes for a thrilling read which will have you guessing until the very end. A mix between a thriller, action and sci-fi, this novel will have something for everyone!
Posted by Juli Rahel at 4/06/2015 09:01:00 am