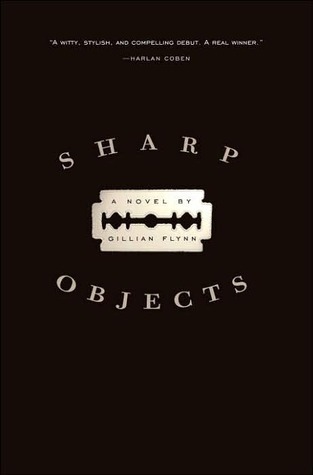 It was hard to escape Gone Girl last year with the film's release and the boatloads of attention that was spent on the book and the author. However, Flynn wrote a number of fascinating books and Sharp Objects was the first one I picked up.


WICKED above her hipbone, GIRL across her heart Words are like a road map to reporter Camille Preaker’s troubled past. Fresh from a brief stay at a psych hospital, Camille’s first assignment from the second-rate daily paper where she works brings her reluctantly back to her hometown to cover the murders of two preteen girls.

NASTY on her kneecap, BABYDOLL on her leg Since she left town eight years ago, Camille has hardly spoken to her neurotic, hypochondriac mother or to the half-sister she barely knows: a beautiful thirteen-year-old with an eerie grip on the town. Now, installed again in her family’s Victorian mansion, Camille is haunted by the childhood tragedy she has spent her whole life trying to cut from her memory.

HARMFUL on her wrist, WHORE on her ankle As Camille works to uncover the truth about these violent crimes, she finds herself identifying with the young victims—a bit too strongly. Clues keep leading to dead ends, forcing Camille to unravel the psychological puzzle of her own past to get at the story. Dogged by her own demons, Camille will have to confront what happened to her years before if she wants to survive this homecoming.

Sharp Objects is a novel that I won't forget for a long time. It is the kind of novel to which the word 'gritty' actually fits. It is a painful read, making you cringe at times while it also has something cathartic to it. The novel takes you on a roller coaster ride while sticking close to Camille Preaker's side. Sent back to her home town to investigate the murder of two young girls, Camille has to face up to her past, which is dangerously close to seeping into her present and future. Flynn describes the oppressive atmosphere in small towns perfectly, the paranoia of everyone knowing everyone and nothing remaining a secret for long. Aside from Flynn's amazing insights into humans, more on that later, the plot itself is incredibly gripping. Below all the layers of narrative there is a really interesting 'whodunnit' story and although there are definitely clear signs towards who it may be there are plenty of twists and turns to keep even the thriller-pro guessing.

Flynn's writing style is gorgeous, just like her characters are. The sentences flow beautifully one after the other but when you look closer there is something terrible to them. Flynn manages to give her different characters very different voices despite the first person narration which means you really get a sense of who surrounds Camille. There are incredibly witty passages which will have you stifling laughter and then there are passages that will have you outraged in their explicitness or crudeness. As I said, it is a roller coaster ride and in many ways that is what adds to understanding Flynn's main character.

Sharp Objects is written in the first person, which can be either hit or miss. Being stuck in a character's mind can become tedious or can reveal serious limits to the author's story-telling abilities. In Camille Flynn has created a fascinating main character. As a journalist and a survivor of a tragic home life, Camille is very complex and difficult to figure out. Crucial things about her sometimes aren't revealed until halfway through the novel and the first person narrative really helps in establishing her as an unreliable narrator. She lies to herself and to others and wishes she didn't have to spend so much time in her own head. Flynn also manages to create the realistic mix between independence, feminism and internalized misogyny which I believe exists within a lot of women. Flynn identifies herself as a feminist and I think I agree with her when she says that feminism doesn't just mean that women should be strong and always happy, it also means accepting that women can be as terrible and dreadful as men can be. Cruelty is a human trait, not a male one.

Gillian Flynn writes women that are deliciously and terribly wrong. Wrong in that Flynn allows the reader a peek behind the carefully prepared facade. Her women are not perfect, they don't get everything right and they don't always have the best intentions. Her women are as cruel as her men and even more so. Flynn herself said the following about women:

'I think women like to read about murderous mothers and lost little girls because it’s our only mainstream outlet to even begin discussing female violence on a personal level. Female violence is a specific brand of ferocity. It’s invasive. A girlfight is all teeth and hair, spit and nails — a much more fearsome thing to watch than two dudes clobbering each other. And the mental violence is positively gory. Women entwine. Some of the most disturbing, sick relationships I’ve witnessed are between long-time friends, and especially mothers and daughters. ...  I wanted to write about the violence of women.' - Gillian Flynn

Central to the novel is the relationship between Camille, her mother Adora and her younger sister Amma. The manipulation, fight for attention and desperation that is packed into this three-way relationships is fascinating and often struck me as true. Personally I loved the dark tone that Flynn used to describe the women's psyche, especially how she approached the paradox of female puberty where the girls are still just girls and yet find their bodies becoming sexualized, not only by others but also by themselves. Flynn covers women's lives from birth to old age, showing the reader young girls, wild teenagers, bored suburban wives and clingy mothers. Flynn examines all of these stereotypes and hits a tone that is at once revealing, judging and somehow pitying. Towards the end of the novel you will find yourself wondering to what extent women, and men, actually have a say in the people they become. To what extent are we simply formed by our parents, our towns and our societies? This novel isn't for those who prefer their lives organized and "clear".

Something that I feel is important to include in a review of this book is a major trigger warning. Camille is a self-harmer and it is given a lot of attention in Sharp Objects, as the title may suggest. Of course Flynn doesn't condone it, but Camille finds herself continuously struggling with her addiction to cutting. Although I was never a cutter, I did identify with some of the themes in the novel and I have been mulling over them ever since finishing it. If this is something you're sensitive to it is worth considering whether you want to risk reading this book. If you think it may harm you, don't pick it up until you're ready.

Sharp Objects is a novel I will be rereading soon and which will be playing around in my mind for a long time. It is dark, witty and cruel, but also hits very close to the heart at times. I will immediately say that it is not for everyone, but once you read it you won't forget it!
Posted by Juli Rahel at 4/02/2015 12:11:00 am