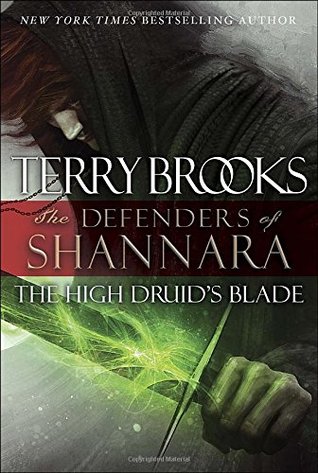 Here I am with another fantasy-read from Orbit, who have been putting out some amazing fantasy books lately. Many thanks to Orbit for allowing me to be part of the blog tour for The High Druid's Blade and providing me with the copy of the novel.


Legend has it that Paxon Leah is descended from the royals and warriors who once ruled the Highlands and waged war with magical weapons. But those kings, queens, and heroes are long gone, and there is nothing enchanted about the antique sword that hangs above Paxon’s fireplace. Running his family’s modest shipping business, Paxon leads a quiet life—until extraordinary circumstances overturn his simple world . . . and rewrite his destiny. When his brash young sister is abducted by a menacing stranger, Paxon races to her rescue with the only weapon he can find. And in a harrowing duel, he is stunned to discover powerful magic unleashed within him—and within his ancestors’ ancient blade. But his formidable new ability is dangerous in untrained hands, and Paxon must master it quickly because his nearly fatal clash with the dark sorcerer Arcannen won’t be his last. Leaving behind home and hearth, he journeys to the keep of the fabled Druid order to learn the secrets of magic and earn the right to become their sworn protector. But treachery is afoot deep in the Druids’ ranks. And the blackest of sorcery is twisting a helpless innocent into a murderous agent of evil. To halt an insidious plot that threatens not only the Druid order but all the Four Lands, Paxon Leah must summon the profound magic in his blood and the legendary mettle of his elders in the battle fate has chosen him to fight.

This was the first novel I have read by Terry Brooks, whose Shannara-series are loved my fans all around the world. The High Druid's Blade is the first stand-alone novel from Brooks in almost twenty years and as such might be a great place for me to get into the world of Shannara. The novel introduces the reader to the character of Paxon Leah, who within the first few chapters goes on a rescue mission for his sister Chrys and discovers the existence of magic. This beginning was almost too fast, with not enough time given to the reader to truly get settled in with the characters and start caring for them. When Chrys is kidnapped the reader doesn't really know her yet and as such it is hard to care for her. It's similar for the main character, who is not given quite enough time to really be explored by the reader.

What Brooks excelled at were the short bursts of history and culture he infused into the narrative. They were interesting and well-written and showed how much Brooks has worked on the world of Shannara. However, this mainly made me more interested in reading Brooks' other books rather than continuing with The High Druid's Blade. I somehow didn't find myself really engaging with the narrative of the book or caring much about the characters. They were interesting, but along with the plot, they followed very typical paths within the fantasy genre. Things seem relatively easily resolved as Paxon goes on his way and I felt that at times the tension was lacking. As such, The High Druid's Blade is definitely marketed best for younger readers who are getting into fantasy.

I am a huge fan of Fantasy-literature, yet mainly find myself enjoying what is called 'high fantasy', a term which mistakenly suggests an inherent difference in quality to 'low fantasy'. Urban fantasy is a great example of what is called 'low fantasy' because it takes place in a real or relatively realistic world, whereas high fantasy is set in a completely fictional realm, a la the Disc-world in Terry Pratchett's books. Another example of high literature is The Lord of the Rings in which Tolkien not only creates different lands but also different languages, cultures and thousands of years of history. The reason I bring this debate up is because at times I was wondering in which of the two categories to put The High Druid's Blade. Although technically classed as 'high fantasy', the Four Lands are identified as Earth after a nuclear war. Magic exists besides technology and both supplement the other. Personally I thought this was really interesting, but it also meant I didn't completely sink into the world the novel was creating because I was thinking too much about it.

The High Druid's Blade is a fast-paced, interesting read which hits a lot of high points Personally I was expecting a bit more, yet this novel is meant for younger readers. I would recommend this book to lovers of Fantasy.
Posted by Juli Rahel at 4/28/2015 12:15:00 am