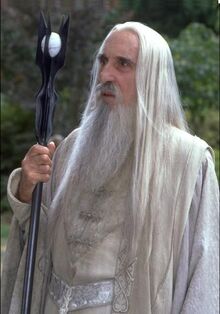 I'm a huge Lord of the Rings-fan, partly because of Tolkien's use of Old English to create Middle-Earth and it's people. I got this book for Christmas called Beowulf & Other Stories, A new Introduction to Old English, Old ICelandic and Anglo-Norman Literatures. The title is endlessly long, but there's also a chapter on Tolkien and they discussed the names of several characters, including Saruman's. This was just to amazing to let it pass, so I hope you find it as enlightening as I did.

So, the name Saruman the White is given by Tolkien to the highest Wizard in Middle-Earth. He is good in the beginning, but turns evil and eventually dies. His name is formed out of the Old English word searu. This word covers a number of pages in An Anglo-Saxon Dictionary by Joseph Bosworth in 1838. The basic meaning is 'cunning' or 'treacherous', but it can also be interpreted as 'weapons' in some cases.

In the dictionary Bosworth says about the coming examples: 'it is uncertain whether the word is being used with a good or a bad meaning'. This gives any reader of Tolkien a glimpse at the creation of Saruman. He has been both evil and good. A word that isn't related to searu but could have inspired Tolkien is searian, which means 'to grow sear, wither, pine away'. Examples with this word usually talk about leaves withering. This could link to Saruman withering away after being cast down by Gandalf or maybe hint at Saruman's destruction of the forest of Fangorn around Orthanc.


Orthanc also has an entire connotation-web around itself. It could be linked to  Searoburh, the Anglo-Saxon name for Salisbury, as it was before being moved from its original location, Old Sarum. This place lies atop an ancient hill, surrounded by defences and topped by the spire of a cathedral. Sarum was a Roman fort once, which is another link to Orthanc, which is said to have been an ancient construction before Saruman came to live there.

The word orthanc itself is also Old English. It means 'original thought, ingenuity'. This has a semantic link to the word searuman, which means 'cunning man'. There is even an Old English word searo-þorn (þ = th), which means 'cunning thought'.  Orþanc also has two other meanings, one translated in Latin as machinamenta, 'mechanical devices'. The other is 'thoughtlessness' or 'folly'.

As you can see all these connotations to his name come together into creating the character of Saruman. He was a cunning man (searu-man), who used mechanical devices (orþanc/machinamenta) in his bid to take over the world. He cannot be seen as a completely bad person, because he is also drawn into evil by the Ring and by Sauron, yet he has the death of Boromir and many more on his conscioussnes.

Old English isn't everyones cup of tea, but as a reader of The Lord of the Rings you'd have to admit that this is pretty genius. Tolkien once said that for him 'the name comes first, that the story' and this just proves that he spoke the truth. To be able to create a character of so many layers sometimes all you have to do is open a dictionnary.

This explanation is not from my own genius, but from the book Beowulf & Other Stories, A new Introduction to Old English, Old ICelandic and Anglo-Norman Literatures. All praise goes to them.

Email ThisBlogThis!Share to TwitterShare to FacebookShare to Pinterest
Tags: Explanation, Fantasy, Names, Old English, The Lord of the Rings, Tolkien