Review: 'Suddenly in the Depths of the Forest' by Amos Oz

I have always been a fan of Amos Oz and was very exited when my request for 'Suddenly in the Depths of the Forest' was accepted.
It will be published on the 21st of March, 2011 by Houghton Mifflin Harcourt.
It is a childrens book and recommended for 10-14 year olds.
Pages: 144
I got this book from netGalley for free. 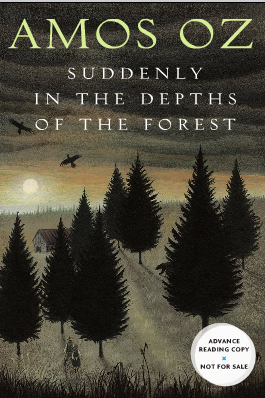 The main characters in this book are Matti and Maya and they live in "the village". This village doesn't have a name, but the name isn't important. Something tragic has happened in the village. Some years back all the animals in the village dissappeared. The entire flock, all the pets and even the insects and birds. Matti, Maya and all the other kids only know about animals through the tales of Teacher Emmanuella. Parents don't want to talk about it and every night all the houses are locked out of fear for the Night Demon Nehi. The forest near the village is forbidden territory, because that is where Nehi lives. The story goes that he once passed through the village and took all the animals.
A little boy, Nimi, is the childrens scapegoat and he makes a fool out of himself in order to be liked by them. One day he dissappears and nobody can find him.  After a week he returns from the forest, muddy and with torn clothes and all he does is whoop. He is excluded by the village community even more, because they think he has whoopitis. Sometimes a child talks about a dream he had about animals in school, but they are always stopped by the harrassment they face if they would continue talking about it.

Maya and Matti are different from the other children, because they have a secret. They never told anyone about their secret, because the knew nobody would believe them and everybody would thin kthey have whoopitis. But they know what they saw, they saw a living fish.
One night Maya decides to stay up and see whether the Demon Nehi actually visits the village at night to steal little kids. All she can see are the nine trees in the valley. The next morning however there are only eight. She tells Matti and he stays up at well and the same thing happens to him.

Together they decide to go into the forest to see whether Nehi actually exists and whether he has all the animals. They go into the forest and climb up the mountain. They come to a cave where thye suprisingly find Nimi, who tells them he only whoops so that he is left alone by everyone. They continue to climb, but they loose each other. Matti decides to look for Maya and finds a gate, from behind which he can hear Maya's voice calling him. He goes in and feels as if he has been there before. Maya has a kitten in her arms and they are so focussed on stroking the kitten that they don't see the man.

He turns out to be Nehi, who's real name is Na'aman. He lived in the village years ago and was harrased, just like Nimi. I won't tell you any more, because I want the ending to remain a secret!! Will they get away from the demon? What about the animals?

The story is written in a simple and incredibly sweet style, that can speak to both kids and adults. It will definitly be a favourite if you like to read books to your kids. The book makes a very strong case against bullying and shows how lonely and bitter it can make people.

A character that I really loved was Solina the Seamstress. She is, in my opinion, the tragic hero of this boo. Her husband tried to get their animals back and when he was found in the forest he had gone mad. He started to shrink to the size of a baby and started to bleat like a litle goat. But Solina stayed at his side and every night she puts him in a stroller and walks him through the village. And sometimes she stops and strokes his head when his bleating becomes very desperate. She is avoided by most vilalgers, but she doesn't seem to mind. She still loves her husband and wouldn't think of leaving him.
While reading that I couldjust see Solina walk through the village, all alone. Isn't that beautiful?

Matti and Maya are really sweet characters and are also complete opposites. Maya is headstrong and Matti is a little bit more insecure and easily frightened. It is very clear that they need each other in order to survive.

I really loved this book and I'll give it:

5 universes!!
I decided to go for universes, because stars are used everywhere!!

First sentence: 'Emanuella the Teacher described to the class what a bear looks like, how ish breathe, and the kind of sounds a hyena makes at night.'

So, would you read this book?