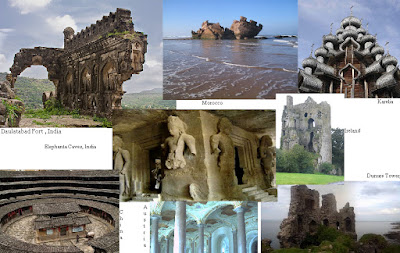 I already showed some of my moodboards/scrapbooks earlier, but I made new ones and I'll probably continue doing so until I'm unable to use the computer.

The one on the left focusses on ruins, because I love ruins. They are great things in fiction, allowing the writer to do endless flashbacks, let his portagnoist/s be hanuted by spirits form the past, show his or her descriptive style or simply baffle us with knowledge of architecture.
My favourite is probably the one on the top left. It's from India and is called the Daulatabad Fort. I have never been to India, but have admired its architecture for a long time. This particular fort, according to ancient Indian texts, is a mixed fort , Misra durg in Indian. It combines the qualities of Giridurg, a mountain fort, Dev durg, God's fort, and Bhumi durg, a land fort. In short, it was the safest place to be.
I love how every picture has a story, but it would be really boring if I told all of them. 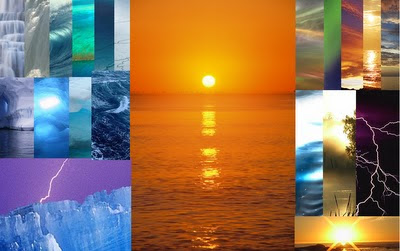 The other board I made is about water/ice and light. It has a lot of details and I basically cut up a lot of pictures and added the bits I liked the most. If you can see your own holiday-photo I'm really sorry I didn't ask for copyright, but that would have taken me longer than making this thing. What annoyes me in books sometimes is the lack of some authors to be able to write what they see. What I mean by this is that I can't stand it if they fail to describe light. It is all around you. I'm not saying I want them to descibe things the way I see them, but there re so many aspects to light that you could write a bit more than: 'The yellow light of the morning sun shone through the window.'
My favourite bit is probably the lighting on the left. It was an amazing picture in total, but too big to put onto the board. The sky was dark, almost black and the lightning illuminated it in a purpelish light. It was so bright you couldn't see anything else. I always loved lightening. I'd sleep in my granparents living-room on stormy nights, pull the big, comfy chair in front of the window and watch. I remember thinking they were like snakes crawling across the sky, dissappearing into infinity.
I know lots of people are scared of lightening and thunder, especially when young, but they are beautiful!How do you feel about lightening?
Posted by Juli Rahel at 12/23/2010 04:52:00 pm