I got this book sent to me a week ago and finished it in three days.
This book is by Laurie Bowler, has a 133 pages and 27 chapters.

Marinette, Nessy, has escaped her Maker, Hervidor, King of the Undead and leader of the terrible Tellis coven. She runs into Charles and his coven and feels an immediate attraction to him. Although she doesn't want to stay, she is convinced to stay by Charles and By Herqacio, Hera, leader of the Gulons, a feline animal that is the vampires sworn enemy. 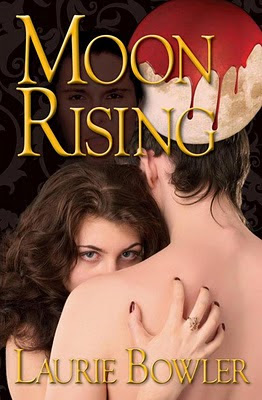 Hervidor comes to visit Charles in his search for Nessy and Charles hides her in a cottage. There their eternal bond is deepened even more. Nessy is a very special vampire because she is still half-human. This is because she has never ever killed a human out of blood-thirst. Nessy has terrible nightmares, in which she relives the night she was turned 300 years ago. In these dreams there is also a man in the shadows, who simply watchesher suffer. It turns out Hervidor is also Charles creator.
After Hervidor has passed Hera ivited Nessy for a Gulon-dance. He reveals to her that her old house is in the gUlon-territory and that her father was the Gulon-leader, which makes Nessy a Gulon as wel. She doesn't know what would happen to her DNA if she turned into a Gulon, but these thoughts are interupted by the news that Hervidor is coming abch, after a hint that Nessy is still around. She decides to try and turn into a Gulon, hoping this will change her traceable smell.
Nessy is as strong and powerful as Hera as a Gulon and joins in when the Gulons go chasing a vampire. It turns out to be Tellis vampire and Nessy kills her by changing back to her human self and surprising the vampire by turning back into a Gulon.
Charles has decided to organise a dance in "honour" of Hervidor and Nessy attendes. Will she survive this confrontation? Will she be able to kill him and release herself from his hold on her? Can she be a human, a vampire and a Gulon at the same time?
I really liked this book. I think it has a really interesting take on the vampire-stories. In most vampire books a full human is the protagonist and has to choose whether to stay with her immortal love or not. This story centers around Nessy, who is a vampire with incredible morals. The book manages to stay away from msot cliches and the writer has a skill in writing descriptively.

What I loved were the flash-backs into her human and her vampire past. The writer also aknowlegdged the fact that a bunch of vampires in a forest can't go unnoticed by the human people in the village next to it. This is something Stephenie Meyer missed, which damages the credibility of her book.

My favourite character is probably Hera. He is really funny and serious at the same time. At the beginning I worried he'd be the JAcob in this story. But I was relieved to read that he had his own lover, Melody, Charles niece. This just makes the friendship between him and NEssy credible and enjoyable.

I give this book:

If you like vampire stories you will definitly like this one. It is different and nice to read. I'm just readin the sequel, 'Sunrise to Sunset', and will post a review of that one as soon as I finished it.
Posted by Juli Rahel at 12/08/2010 01:43:00 pm