This book was sent to me by Tammie to review and once I started reading I finished it in 3 days. Although the plot is terribly difficult it certainly grabs your attention immediately. 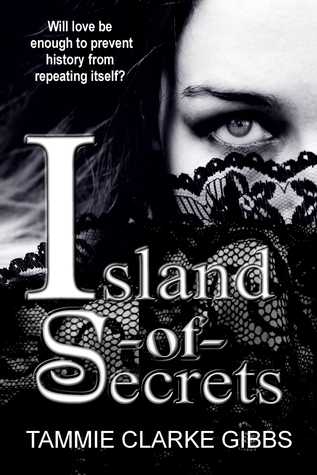 Lila is our heroine and we meet her for the first time when she's on a ferry to Leigh Island. She has taken her friend's identity as Cassie, at her friend's request, and is out to investigate the rumors about ghosts on the island. She doesn't want to stay, but is picked by the Island's boss, the mysterious Shane Alexander, to be the only journalist allowed on the island.

While being given a ride in a carriage by a butler, she presumes, she finds a purse with an invite to a Masquerade ball with her name on it, a note telling her to stay away and a big ruby ring that she slips on her finger. When arriving at the hotel she finds she is surrounded by what she thinks are idiots, that dress like their from another century. Shane is there as well, but he behaves very strangely.

She wakes up in a room and finds Shane banging on the door. The room she has been sleeping in was locked for 300 years and she has the key. She has come back to the modern time and realizes that she was in 1796 last night. The Shane that woke her up is the spitting image of the one in 1796 and Lila is completely confused, while he still thinks she is Cassie.

That evening Shane tells her about the link between the iiland and his family, which started in 1700. He finds the ring after she has fallen asleep and slips it onto her finger, after which she disappears from his arms. He looks for her frantically in the present day, while she is 1796. There Uncle Gustavas, who was apparently the one who invited her to the island, got murdered and she was lured to his room where he lay dead by a woman in white. 1796' Shane found her with strangle-marks on her neck. Will her murderer try again? Will she fall in love with Shane? Will she ever get back to the present and if yes, will she still want to go back?


I wouldn't want to give away more of the plot, because the plot makes this book! It is so complex. Sometimes I found it hard to separate present from past, but that was mainly because some events in past and present coincide and because all of the characters in 1796 are also there in the present day. Lila is a very like-able character. She is a modern, independent woman, that is suddenly in this new world where everybody either hates her or loves her.

Gibbs writes in a very readable style. She is descriptive and detailed at the right places. She has a real talent for describing landscapes, especially when talking about the cliffs. This is great for the reader, because it gives you the ability to “see” the story. The scenes in which Lila is haunted by the woman in white and her search for her murdered are intense moments that almost change this novel into a detective/thriller.Time-novels are a very difficult thing to finish and give a good ending, but Gibbs has done a remarkable job in giving the story a fitting end.


The Shane in 1796 is incredibly mysterious and for a while you suspect him of wanting Lila dead. I don't want to tell to much of course, but their love is described really well by Gibbs. She gets into the emotional and physical feeling, without making it pornographic.

The characters I really liked in 1796 was Amelia.
Amelia is a really warm personality and the scene in which she gives birth is incredibly sweet and, I think, a very important scene for Lila. Amelia becomes a good friend to Lila and you almost miss her in the present.

There were two characters I really liked in the present-day and that were Caroline and Montague.
Caroline is a genuinely sweet and independent person, who helps Shane calm down when things get heated and hides with him when the police come looking for Lila. She is in love with Montague and I really liked this, because the author didn't fall into the trap of making every woman fall in love with the main man.

I really like Montague because his character is so different from the Montague in 1796. In 1796 it is hard to sympathize with him, but in the present he's really likeable. He is the one who keeps Shane out of trouble.

If you liked the Time-traveler's Wife, you'll most likely also enjoy this book! The only thing that kept me from giving it the complete four universes was that it had me confused some times as to what just happened.