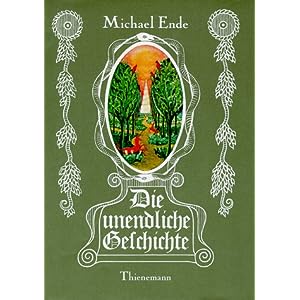 Die Unendliche Geschichte is a German book for children, written by Michael Ende. My father read this book to me and I loved it.

The main character is Bastian Balthasar Bux, a little 10/11-year old boy that is being harassed in school. His mother died in an accident and his father never really got over it. He works a lot and Bastian is neglected as a consequence to that. While running from other kids he hides in an old bookstore, where he finds a book called 'The Neverending Story'. He steals it and decided to hide in the school attic for as long as possible.
The book is about the land of Phantasia, that is ruled by the Childlike Empress. There is something terrible wrong though, because the country is slowly disappearing. Where once was land Nothing remains and I mean Nothing. Not just plan ground, but a Nothing that draws everything that looks at it into it. To find the cause and stop this the Childlike Empress sends the green-skinned Indian boy Atreju. Atreju is of Bastian's age and has everything Bastian wished he had.

Bastian finds he can influence the way the story goes and give Atreju hints. HE can see that Atreju will never be able to save Phantasia, only he himself can, because he knows the new name of the Empress. When she gets a new namePhantasia will resotre itself. Bastian however thinks that the Empress will think he's to low to help, so she has to trick him into saying her name: Moonchild.

As a result Bastian enters Phantasia and the Empress gives him a mission. Through his wishes he is supposed to recreate Phantasia the way he wants it to be. His wishes are fulfilled by the Empress' amulet, Auryn. He now wishes to be everything he always wanted to be, strong, powerful and wise. Something the Empress didn't tell him was that the amulet takes a memory of his "real" life everytime he wishes something. When he realizes this it is almost to late. Will he be able to get home? To see his father again?

I absolutely loved this book when my father read it to me. Not only the concept of a fantasy-world, but the entire story. My copy had an amazing way of making a difference between the story and the book that is read. The "real" story was in green print and the books story in red.

The book's central story is a story about a boy that is harassed and bullied and has generally given up on life. You feel so sorry for him and I think everyone knows how it feels to be able to compeltely escape into a book. It was almost spooky though how the story comes into his life. At a certain point there are stuffed versions of animals he has just read about that weren't there before. And when he looks into an old mirror Atreju in the book can see him.

The Childlike Empress is a very strange character. She is this beautiful and powerful young girl that rules this entire empire, but has to be "rejuvenated" by this boy in the modern world. I have come to believe that this is Michael Ende's way of showing that fantasy is dependent of the person. Imagine there was a country where all your creations of the mind went to, all the little people you came up with. They would "die" once you stopped thinking or caring about them. If no child would have a fantasy world or creation left, would fantasy die?

Michael Ende sometimes said this himself. He believed that we had everything on the exterior, but were poor on the inside. When we grow up and enter this world of facts and hard data we can only survive if we keep the child inside ourselves alive. He dedicates all his books to the Eternal Chidlike within every human and this is why his boks cannot be classified as children's books. I completely agree with this. I have read and reread this book so many times, seperately and together with my father and both of us always got enchanted by this world.

I think fantasy is something crucial to human survival. This might sound pompous or melodramatic, but what would happen if no one would ever be able to fantasize about things? Life would be so dull and grey if you can't imagine things. Imagine no one being able to "see" the old Greeks in their temples, or to "see and smell" the banquets or fights when walking in the ruins of a castle. No more books would be written, no more children's stories.

My favourite character from this book is probably the dragon Fuchur. He is a dragon of luck and resembles the Chinese drawings of dragons, with their long smooth, snake-like bodies. He is just such a symbol of hope and happiness that I never forgot. In my mind I always compare dragons in movies to Fuchur. He is such a help to Atreju and is just one of the most convincing characters in the book. Dragons are either portrayed as these fire-spitting beasts that cannot be controlled, only killed, or old, whithered creatures.

Movies about this book have always failed. I watched two versions and walked away crying both times, because they're simply rubbish and ruin the story. There are some books that are called non-filmable and until this day this books has proven to be one of them. I think it could be filmed, but the script would have to be written by someone who loves the story and understands it properly and knows it's not only for children.