Books I received on the 4th

We went to visit Jewish friends today to celebrate Chanukah and one of them borrowed me four amazing books that I've heard of and had wanted to read for a long time.

'The Moonlit Cage' by Linda Holeman
From what I've read so far (I couldn't stop myself, I had to start reading in the bus) it reminds me terribly of 'The Kite Runner' and 'A Thousand Splendid Suns'. It is about an Afghan girl, Darya, who tries to break the rules imposed on women and escapes to 1850s London.
First sentence: 'I have always been told I was wicked.'
I can't wait to finish this book and you can be sure I'll post a review about it, even if it's four years old.

It was first published in 2000 and is translated by Barbara Harshav.
Shalev is one of the best Israeli writers and 'has that memorable narrative voice which commands attention' according to La Republica.
The protagonist is Zayde, whose mother, on arriving in a small town in Palestine, immediately attracted the attention of three men. These three men all help his mother raise him and all three see him as their son. The book is structured in four "parts", the Four Meals, that take place across decades.
I can't wait to read this book, because the story sounds really exiting. This is a sentence I'll repeat a lot.
First Sentence: 'On warm days, a soft smell of milk rises from the walls of my house.'
Persian Brides, by Dorit Rabinyan

This book was first published in 1995 and became a best-seller in Israel. Dorit Rabinyan was called 'the new young star of Israeli literature' by Hervormd Nederland. The book was described as 'richly written, perfectly controlled, and I would say desperatly sad if it weren't for the streaks of joy'. Obviously I can't wait to read it.
The story is about two young Jewish girls in a Persian village. It covers two days in the lives of Nazie and Flora. Nazie can't wait to get married to her cousin, but has to wait until she starts menstruating, while Flora is married, pregnant and abandoned.
Rabinyan has written a book of peotry and of play next to this.
First Sentence: 'That night Flora wanted to eat watermelon.'
To know a woman, by Amos Oz
I'm a big fan of Amos Oz, I'll immediately admit that. So when I saw this book I knew I wanted to borrow it. Amos Oz is Israels best living author and his works have been translated in over 22 languages. 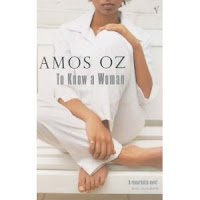 This book is about the Israeli secret service agent Yoel Ravid, who retires to the suburbs with hsi daughter, mother and mother-in-law after his wife's accidental death. After having spent his life uncovering toher peoples secrets he has to face his own lies, his wife's life and death, his daughters behaviour and his service to the state.
'Oz is a prophet in spite of himself, and his novels are extended parabels.' said the Sunday Telegraph.
First Sentence: 'Yoel picked the object up from the shelf and inspected it closely.'
Speaking of Amos Oz, I will post a review of his upcoming book 'Suddenly in the Depths of the Forest', which will be published coming March.
Do you have a favourite Amos Oz book?
Posted by Juli Rahel at 12/05/2010 12:38:00 am