Anway FF is hosted by Parajunkee's View and this weeks question is:
What book(s) have you discovered lately from someone's book blog?

Well, I noticed that a lot of people were reviewing Matched by Ally Condie. Most of the reviews were really positive and I decided to get it myself, so I'm still in the process of getting it!
Cassia has always trusted the Society to make the right choices for her: what to read, what to watch, what to believe. So when Xander's face appears on-screen at her Matching ceremony, Cassia knows with complete certainty that he is her ideal mate . . . until she sees Ky Markham's face flash for an instant before the screen fades to black.

The Society tells her it's a glitch, a rare malfunction, and that she should focus on the happy life she's destined to lead with Xander. But Cassia can't stop thinking about Ky, and as they slowly fall in love, Cassia begins to doubt the Society's infallibility and is faced with an impossible choice: between Xander and Ky, between the only life she's known and a path that no one else has dared to follow.

Next to that I found ﻿Nefertiti by Michelle Moran on All Things Historical Fiction. It sounds like a great book and I love Egypt and its history. I was in Berlin in October and went to the exhibition on Nefertiti and it was amazing! 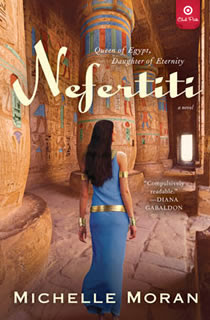 This fictionalized life of the notorious queen is told from the point of view of her younger sister, Mutnodjmet. In 1351 B.C., Prince Amunhotep secretly kills his older brother and becomes next in line to Egypt's throne: he's 17, and the 15-year-old Nefertiti soon becomes his chief wife. He already has a wife, but Kiya's blood is not as royal, nor is she as bewitching as Nefertiti. As Mutnodjmet, two years younger than her sister, looks on (and falls in love), Amunhotep and the equally ambitious Nefertiti worship a different main god, displace the priests who control Egypt's wealth and begin building a city that boasts the royal likenesses chiseled in stone. Things get tense when Kiya has sons and the popular Nefertiti has only daughters, and they come to a boil when the army is used to build temples to the pharaoh and his queen instead of protecting Egypt's borders. Though sometimes big events are telegraphed, Moran, who lives in California and is making her U.S. debut, gets the details just right, and there are still plenty of surprises in an epic that brings an ancient world to life. (July)

I'd like to remind everyone of the Giveaway!! It's the post below and you can win an E-book version of Keta Diablo's novel 'Where the Rain is Made'!