Tuesday Intros and Teaser Tuesdays - 'The War of the Worlds' by H.G. Wells 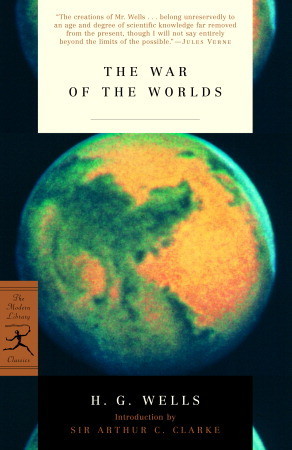 by H.G. Wells, which I am rereading. My review is over here, but I utterly love this book. I'm currently working on a small project where I am trying to turn the book into a film script. Naturally it is not the easiest thing to do but I love interacting with a book in this way. I have to go quite deep and find the real message and themes in order to preserve those in an adaptation!


Man had not yet learned to fly when H.G. Wells conceived this story of a Martian attack on England. Giant cylinders crash to Earth, disgorging huge, unearthly creatures armed with heat-rays and fighting machines. Amid the boundless destruction they cause, it looks as if the end of the world has come.

Tuesday Intros is hosted by Diane over at Bibliophile by the Sea and Teaser Tuesdays is hosted by MizB over at Should Be Reading.

'No one would have believed, in the last years of the nineteenth century, that this world was being watched keenly and closely by intelligences greater than man's and yet as mortal as his own; that as men busied themselves about their various concerns they were scrutinized and studied, perhaps almost as narrowly as a man with a microscope might scrutinize the transient creatures that swarm and multiply in a drop of water.' p.7 (first page)

Yup, all of that is just one sentence and doesn't it just blow your mind away? If you like it, definitely hop over to Youtube and listen to how Jeff Wayne adapted the intro for his musical version of the book. Check out the whole thing if you're a fan of synthesizers and electrical guitars like me!

Teaser: (my explanation features a spoiler)

'The Thunder Child fired no gun, but simply drove full speed towards them. It was probably her not firing that enabled her to get so near the enemy as she did. They did not know what to make of her. One shell, and they would have sent her to the bottom forthwith with the Heat-Ray.' p.110

The Thunder Child is an ironclad, a war ship. As the Martian are trying to stop a steamer ship of people from escaping, she rescues them by sacrificing herself. I always loved this part because it's so tragic and beautiful and it's the last high point of humanity before the Martians really take over!