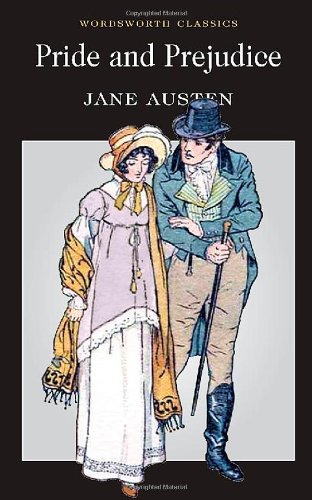 This week I'm blessed enough to be reading one of my favourite books for university. I love it when these two major parts of my life come together in this way. This week I am teasing you with Pride and Prejudice by Jane Austen.

Pride and Prejudice, which opens with one of the most famous sentences in English Literature, is an ironic novel of manners. In it the garrulous and empty-headed Mrs Bennet has only one aim - that of finding a good match for each of her five daughters. In this she is mocked by her cynical and indolent husband.With its wit, its social precision and, above all, its irresistible heroine, Pride and Prejudice has proved one of the most enduringly popular novels in the English language.

As the synopsis above already says, this book has one of the most famous opening lines ever so I figured it would be perfect for today's memes! Tuesday Intros is hosted by Diane over at Bibliophile by the Sea and Teaser Tuesdays is hosted over at A Daily Rhythm.

'It is a truth universally acknowledged, that a single man in possession of a good fortune, must be in want of a wife. However little known the feelings or views of such a man may be on his first entering a neighbourhood, this truth is so well fixed in the minds of the surrounding families, that he is considered the rightful property of some one or other of their daughters.' p.1

I thought I'd share a bit more than the opening line and provide a little bit more context because it is especially the context that is what makes line so perfectly ironic! A truth doesn't have to be acknowledged and nothing is agreed upon universally, and by adding the second sentence it becomes clear exactly what Jane Austen thinks!


'Elizabeth awoke the next morning to the same thoughts and meditations which had at length closed her eyes. She could not yet recover from the surprise of what had happened; it was impossible to think of anything else; and, totally indisposed for employment, she resolved, soon after breakfast, to indulge herself in air and exercise.' p.115

This is why Elizabeth will always be my favourite because this is exactly what I do when I am stuck on something! Go outside, get some fresh air and take my mind off of things!


So, that is my read for this week! What are you guys teasing at the moment?
Labels: Elizabeth Bennet Elizabethan Literature Jane Austen Memes Pride and Prejudice Teaser Tuesday Tuesday Intros Victorian Literature