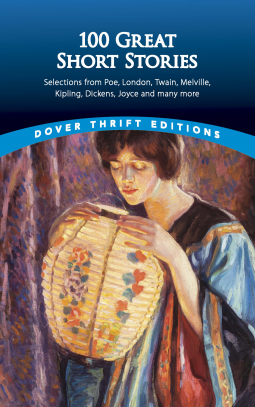 
This treasury of one hundred tales offers students and other readers of short fiction a splendid selection of stories by masters of the form. Contributors from around the world include Edgar Allan Poe, Harriet Beecher Stowe, Guy de Maupassant, Charles Dickens, Anton Chekhov, Mark Twain, Saki, Luigi Pirandello, Kate Chopin, and Ring Lardner.

The way that the stories are organised is one of the major perks of this anthology. Many short story collections will organise the stories by theme or maybe by author, which, although logical, is also confusing at times. Where 100 Great Short Stories differs is that Daley has organised these stories chronologically, by their publication date. Being a profuse short story-reader, I thought it was fascinating to see the development that this form of story-telling went through. A lot of the earlier stories dealt with morality, religion and sin, then slowly shifting to more self-aware topics. Authors looked at themselves, at their own lives and emotions, and at how their societies functioned and this is reflected in a lot of the later stories. It was really interesting to see how short stories started being written from first person narratives, before the general trend seemed to shift to omniscient narrators and then back to first person. The only thing that could've been improved upon is that it would have been great to have the publication date of the short story next to the title within the actual book and not just in the index.

Initially I was wondering where Daley would source his stories from. A lot of interesting stories have been written by white, Northern European men, but that doesn't mean that their stories are the only ones I want to read. I was incredibly happy to see stories by Mary Shelley, Kate Chopin and Virginia Woolf pop up. Besides that there were also stories from Russia (Dostoyevsky), Italy (Luigi Pirandello) and Brazil (Machado de Assis) alongside many more. The variety of this anthology is one of its major advantages because, by showing how short stories developed in different countries, the reader not only has a good time reading these provided stories but also walks away with a new understanding of the genre. The anthology ranges from humorous tales to intense society criticism, includes ghost stories and stories about donkeys. There is bound to be a story in here for everyone, and most likely you'll end up enjoying almost all of them. I do wish that maybe some modern stories had been included, modern meaning from the 21st century.

I have already hinted at this above but what really struck me with all of the stories is that all of them are about humanity. This shouldn't be a massive surprise to anyone who has ever read a book since humans are their own favourite topic. But short stories don't allow an author endless time and space to set up their characters' mind frames and yet each of the authors in this anthology manages to "get deep". 100 Great Short Stories really does show the best of its genre, showing the delicacy with which these stories and characters are crafted. Whether they're discussing love, crime, death or wealth, these stories are balanced and thought through and show how much can be done.

I give this anthology ...

100 Great Short Stories is a great anthology, which includes both male and female authors from a large range of countries. Allowing you to see the development of the short story genre throughout the last century, reading through this anthology is a lot of fun. I would recommend this to people who enjoy short stories.
Posted by Juli Rahel at 3/09/2015 08:56:00 am