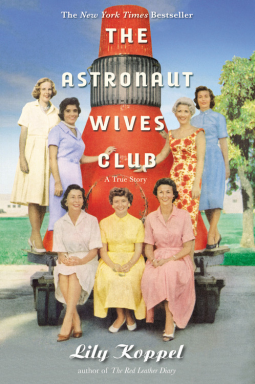 I am a major fan of the Mercury Seven and everything to do with them. 'The Right Stuff' is one of my favourite films and Gus Grissom makes me cry. So when I saw Koppel's novel on Netgalley I knew I had to get my claws into it. And I'm sure glad that I did!


In a thoroughly researched page-turner that transports readers back to the beginnings of our space race, bestselling author Lily Koppel reveals for the first time the stories and secrets of America's unsung heroes-the wives of our original astronauts.

As America's Mercury Seven astronauts were launched on death-defying missions, television cameras focused on the brave smiles of their young wives. Overnight, these women were transformed from military spouses into American royalty. They had tea with Jackie Kennedy, appeared on the cover of Life magazine, and quickly grew into fashion icons, donning sherbet-swirled Pucci dresses and lacquering their hair into extravagant rocket styles.

Annie Glenn, with her picture-perfect marriage and many magazine features, was the envy of the other wives; platinum-blonde bombshell Rene Carpenter was proclaimed JFK's favorite; Betty Grissom worried her husband was having affairs; Louise Shepard just wanted to be left alone; and licensed pilot Trudy Cooper arrived on base with a dirty secret. With each spectacular launch, they worried they might never see their husbands again. Together they formed the Astronaut Wives Club.

A fascinating, dishy and moving read, , set against the backdrop of the Space Age and a country that would be forever changed by it, THE ASTRONAUT WIVES CLUB tells the real story of the women who stood beside some of the biggest heroes in American history.

I very much appreciated Koppel's awareness of the pressures that these wives found themselves under over night. Whereas their husbands were looked after and trained in how to deal with the media attention, the wives were largely left to their own devices. Add to this the fact that the life of a test pilot's family was never easy, these were fascinating women. Koppel was clearly aware of this since she references these facts frequently in the book, and yet often I found her descriptions of the women to be almost glib. A key scene for me was the women getting together about their photoshoot for Life magazine. Not only would this be the women's official introduction to the world but it could also have been a great moment to really discuss how these women came together. Instead there is quite a lot of talk about the choice of lipstick and gossip between the women. Besides this the book seems to be in severe need of editing, whether it is trimming back on the confused writing style or adding some logic to the jumps in chronology or theme.

On the one hand I am incredibly happy that books are being written about women such as these, yet I'd hope that by now we would be able to write them differently. The Astronaut Wives Club seems to not want to take itself too seriously and present these women as relatable, when, of course, their lives are drastically different than most women's lives today. Not only the women are belittled but so are the men. These men were going through major changes in their life and although they had more leeway than the women and were given help, they were still pioneers and should be treated as such. Overall, Koppel fails to really go into depth about the women involved. There are fascinating women in this group, with great histories and characters. Rather than flying over those aspects of their lives and then lingering on their superficial, I would've wished that she had taken her time.

Besides this, the scope of The Astronaut Wives Club was way too big. Stretching from the Mercury Programme in 1958, to Gemini, to the end of the Apollo programme in 1972, Koppel covers roughly 50 families. For a historical biography that is aiming to really give you an insight into these families, that is simply too much. Not only does the reader get confused at the different names, but so does the author. Society changed a lot between '58 and '72 and there were major developments in world politics. Events such as the Bay of Pigs Invasion in 1961 is casually mentioned as something that must've given JFK a bit of a headache, when naturally the Cold War played a massive part in the Space Race between Russia and the USA. If Koppel had chosen one programme to focus on, she  probably would have been able to reach more depth in her writing.

Although The Astronaut Wives Club is an interesting book, that is largely due to the fact Koppel chose an interesting subject. There is a lot more that could be written, a lot more depth that could be wished for, but if you want a general introduction to the wives of some of America's first astronauts, then this could be the book for you. However, with a very superficial and gossipy tone, it is not something for people truly interested in the Space Age.
Posted by Juli Rahel at 3/16/2015 10:27:00 am