Review: 'The Man Who Was Thursday' by G.K. Chesterton 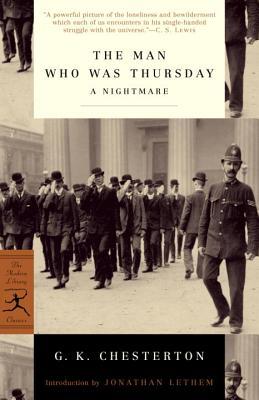 This book was on my 100 Classics list and after a friend of mine talked about really enjoying it in school (which I thought was unheard of) I decided now was the time to try it! And this book is one of a kind, for sure.


G.K. Chesterton's 1908 masterpiece, The Man Who Was Thursday, is a metaphysical thriller, and a detective story filled with poetry and politics. Gabriel Syme is a poet and a police detective. Lucian Gregory is a poet and a bomb-throwing anarchist. Syme infiltrates a secret meeting of anarchists and becomes 'Thursday', one of the seven members of the Central Anarchist Council. He soon learns, however, that he is not the only one in disguise, and the nightmare begins…

The Man Who Was Thursday is strange, from its very title to its last page. Chesterton plays with everything, from anarchy to the most conservative idea of religion. As a consequence every chapter contains almost completely unexpected twists and turns, even when the turns are expected Chesterton works them in a way that it is mind-blowing. As the story hurdles towards its conclusion, the reader gets the sense that he can almost see Chesterton's mind work. The novel is both deep and funny, both pretty and terribly tragic. Whether he is discussing anarchy or the colour of someone's hair, Chesterton refuses to make anything easy for his reader but that is the whole joy of the book. Working for something when Chesterton is the one giving the homework is fun.

It would be too easy to call The Man Who Was Thursday just a detective story or just a thriller, even though it could definitely be considered both of these. On the one hand it is also a very philosophical book, one which explores the state of society and the moral of our people. On the other hand it is an utterly diabolical book. The beauty of The Man Who Was Thursday lies in its complexity and in the fact that it has layers which can be interpreted in different ways, over and over again. Who is right, what is right, is there even such a thing as right? By letting the narrative spin in ever tighter circles Chesterton manages to ask some major questions, such as what lies at the very root of modern humanity. Can those who take part in our society actually be anarchists, desperate to destroy everything and everyone? How do you respond when the faces of evil are slowly revealed to be those of heaven?

Chesterton's writing is beautiful. I could try to be more prosaic about it, but since I'm about to share some of his writing with you I wouldn't want to sully it with my own ramblings.


'The inside of the wood was full of shattered sunlight and shaken shadows. They made a sort of shuddering veil, almost recalling the dizziness of a cinematograph.' p.101

As you can, hopefully, see, Chesterton creates beautiful imagery with his words. His writing is stunning in its elegance, but then he manages to make comparisons which seem utterly confused. In many ways his writing style is a mirror to the nature of his tale. Nothing is as easy or hard as it seems and behind every nice metaphor there is a hard truth.

The Man Who Was Thursday has become a new favourite. Chesterton's book is a roller-coaster ride from beginning to finish and you're bound to pick up some interesting conversation topics along the way. If you love a good riddle, The Man Who Was Thursday will keep you puzzling and if you like mysteries then it will have you guessing till the very end.
Posted by Juli Rahel at 3/19/2015 11:37:00 am