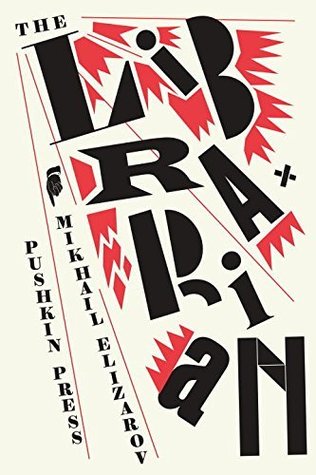 Sometimes a blurb is so fascinating that you simply have to pick up the book and devour it. Every reader has felt inspired and empowered by a book at some point, but what if books genuinely gave you superpowers? I guess you'll have to read The Librarian

to figure out what would happen next.

If Ryu Murakami had written War and Peace.

As the introduction to this book will tell you, the books by Gromov, obscure and long forgotten propaganda author of the Soviet era, have such an effect on their readers that they suddenly enjoy supernatural powers. Understandably, their readers need to keep accessing these books at all cost and gather into groups around book-bearers, or, as they're called, librarians. Alexei, until now a loser, comes to collect an uncle's inheritance and unexpectedly becomes a librarian. He tells his extraordinary, unbelievable story.

Usually you have a pretty good idea what a book holds in store for you when you begin it. You have read the blurb, you have assessed the cover and maybe you already know the author as well. Starting The Librarian I thought I knew what I was up for but Elizarov proved me completely wrong. Starting off by introducing Gromov and some of Russia's librarians the reader feels as if they have been dropped into a completely unknown world which is shocking and fascinating. On the one hand this introduction is really interesting, on the other hand it requires some determination to stick with what sounds, at times, like a textbook. Not until the main narrator, Alexei, comes in does the reader find some solid footing in the narrative. In an interesting twist, the reader already knows more about this world of librarians and special books than Alexei himself, meaning that the relationship between Alexei and the reader is continuously interesting. When the relationship between a reader and his protagonist is developed in this way it means the reader can be independent of him or her, making up their own mind about what's happening in the narrative. This also means that the reader can choose to despise the protagonist, which is a big risk to take for the author.

Elizarov's novel works on a number of different levels. Not only do we explore a man's psyche, we also investigate the power of words and get a glimpse into the political and social landscape of Russia post-Stalin. Elizarov uses these different levels to craft a narrative that is incredibly Kafka-esque, while still somehow making sense. Added to this narrative is quite some violence, at times rather graphic, which is something that I wasn't quite expecting but seems logical when you think of the passion people show for "normal" books every single day. What makes this violence acceptable is that the essence of Elizarov's novel is utterly fascinating. Words have always had enormous power and those who say that a picture is worth a thousand words has to be thinking of a very special picture. The idea that this specific set of books has not only its own power but also the ability to give power to others is simple and yet intricate. Elizarov thinks of all the details; how does it work with copies of the book, how about public readings, etc. Words have been the cause of all major conflicts in the world, whether those conflicts have been over religious texts or inspired by rousing and passionate speeches.

Elizarov explains much while leaving enough unsaid for the novel to be mysterious until the last page. There are revelations and twists in almost every chapter and the richness with which Elizarov paints his world means none of these twists seem unfounded. Although I really enjoyed The Librarian I won't be rereading it for a while. Knowing the twists and turns and all the background information, it would be hard to go back to it and experience the same kind of surprise. There are definitely new details to be discovered though. Andrew Bromfield does a great job at translating Elizarov's prose, maintaining his tone throughout. Whether the novel is waxing lyrical over the Motherland or describing a massacre, Bromfield's translation keeps the reader engaged and passionate.

I really enjoyed Elizarov's The Librarian. It is unlike most of today's novels, sparing the readers none of the details while showering them with stunning image after stunning image. I would definitely recommend this to fans of Russian literature and those looking for a challenging and rewarding read.
Posted by Juli Rahel at 3/01/2015 07:09:00 pm