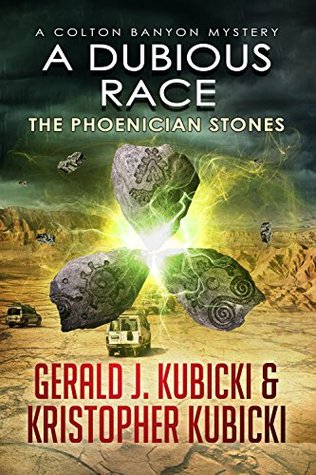 I've got another great novel for this week's Spotlight post. This time I'm sharing a sci-fi action novel with you: A Dubious Race: The Phoenician Stones by Gerald J. Kubicki & Kristopher Kubicki. This is the 14th book in the A Colton Banyon Mystery-series and this book was only released this week as well so it's a newbie!

Ever wonder who really discovered America? Did you know they are still here? This book explores the evidence and the startling conclusions.

Colton Banyon enters the Law offices of Dewey & Beatem and finds his business partner, Bart, has gone missing He becomes mired in paperwork to keep the organization functioning. His day goes downhill from there as an old client, Professor Lisa Lange, suddenly intrudes and asks for his immediate help.

Professor Lange claims she has uncovered evidence which solves several ancient archeological mysteries and poses a few more. She has photos of ancient stones which tell an unbelievable story. She claims the Phoenicians discovered America and discloses evidence to prove it. Not only that, but she claims the Phoenicians never left and are still here.

Professor Lange needs Banyon’s help because one of the stones has been stolen from a ranch in Nevada. She needs it back as proof of her theories.Banyon and his new team members race to the ranch to investigate, but soon find out there multiple suspects in the thief and an incredibly determined villain who will stop at nothing to own the ranch.

I (Gerard) was born and raised on Eastern Long Island in the Westhampton area. My youth was full of adventures since we had miles of woods surrounding my home and we were near the ocean. I didn’t know until I reached college that most people didn’t have celebrities living nearby. The Hamptons are loaded with them. I considered myself an athlete and excelled in baseball. My goal was to play major league baseball, but a shoulder injury ended that dream.
I attended college at Suny Plattsburgh on an academic scholarship. My mother told people that I was an educated bum.

For more on Gerard and Kristopher, hop over to their bio! Find more about them and the book on the authors' website, Goodreads, Amazon and Facebook.

And now, especially for you: a short excerpt from the book!


“Oh, this is a valuable artifact alright,” she answered with a throaty laugh. Banyon now sat up in his chair and motioned for Mandy to take notes.“What can you tell me about the artifact?”“As you know, I am a professor of history at UNLV. One of my students brought me a picture and told me that the artifact in the picture had been recently stolen from his grandfather. The artifact is a stone tablet with writing on it. I have been attempting to verify the language and what was written on the stone. I’m hoping that you could meet me and go over my findings. I think you’ll want to help me.”“I’m not in Las Vegas at the moment,” Banyon said.“Oh, I’m sorry. I forgot to tell you that I’m here in Chicago at Northwestern University. I came here because a friend of mine is an expert on ancient languages. Are your offices near here?” She asked politely.

“Was he able to read the words on the tablet?” Banyon asked.“Yes and the implications are earth shattering,” she replied. “I’m going to visit with another friend of mine while I’m here to fill in some more blanks.”“Can you tell me what you have discovered?” Banyon was now curious.“If we can authenticate the stone, it will change our knowledge of who discovered America,” she said. “But there is much more.”“Let me put you on hold for a second,” Banyon said.“Alright.” She said with disappointment.Banyon turned to the wide-eyed Mandy. “I want you to collect Steve and Heather and be back in my office in five minutes. I have something to tell you,” Banyon told her.“Yes, sir,” she yelled and saluted, she was already going out the door.Banyon hit the mute button and once again began talking to Lisa. “Do you have transportation to get you here?”“I’ve a car. I can GPS your location,” she responded.“Good,” he gave her the address of the office. “It should take you about an hour from the university.”“I’ll see you then,” she replied.“I do have one question first,” Banyon said.“What is your question?”“So who really discovered America?” Banyon asked.“It was the Phoenicians, of course.”