I had mixed feelings about going to see this play. Not because I'd ever not want to go to the Globe or because I was expecting a bad performance or play, it is Shakespeare after all, but because I am quite an independent, equal rights girl and I didn't know whether I would like watching a woman being tamed. But I did enjoy myself terribly, I don't know whether I ever laughed this much and I felt they dealt with the taming delicately.

For those unfamiliar with the play, it is set in Italy and Baptista has 2 daughters, the eldest, Katherina, who is everything from feisty to aggressive but never calm, and Bianca, who seems to be her polar opposite. The latter has many suitors who cannot press their suit unless the eldest is married. In comes Petruchio, who seems mainly interested in Katherina's dowry and believes he can tame her. What follows is their power struggle until Katherina gives in and becomes the best wife of the bunch, trumping even her sister in obedience.

The performance started of with the entrance of Christopher Sly, dressed in a footbal shirt, entering the stage drunken, "peeing" on the stage and fainting. The actors then decided to stage a play for Sly, convincing him he was a lord. This included one of the actors, Tom Godwin, dressing up as his wife which was a very impressive feat and had quite a lot of women amazed. Although they don't come back to Sly, I believe it is rather important. Shakespeare here shows us that a drunken fool can be made to seem like a nobleman when everyone knows he is really not. In the way he is "changed", Katharina is eventually tamed.

The performances by the actors were brilliant. One of the highlights at the beginning, as already mentioned, was Tom Godwin dressing up as a noble woman and he maintained his funny streak throughout the play, drawing regular cheers from the audience. Pearce Quigley as Grumio, Petruchio's servant, had me on the constant lookout for him because he was simply comedy gold. The way he talked, underlining the heavy irony of his character, his interaction with Petruchio, especially the constant kicking of the bucket every time Petruchio mentioned his father's "untimely end", and his generally amazing performance made him much beloved by the audience as well. Sarah MacRae gave her Bianca a sharp edge by making it seem she played her father into believing she is so very innocent when she has the same capability of cruelty as her sister. It made her character less of a device of contrast and rather a fully fleshed person. Joseph Timms as Lucentio, in love with Bianca, is adorable in his acclamation of love, showing the stark difference between how wooing might typically have been presented and how Petruchio goes at it. Jamie Beamish as his servant Tranio, dressed up as Lucentio for the biggest part of the play, was highly enjoyable in his over the top acting as his master, getting both of them in trouble.

And of course, Samantha Spiro as Katherina and Simon Paisley Day as Petruchio were amazing. She was amazing in her energy and convincing rage. What I enjoyed was that she did play Katherina as being slightly out of control. She is not just what would have been seen as disobedient for Shakespeare's time, she is even hard to deal with for our time, knocking over walls and bashing instruments over teachers' heads. This allowed for her 'taming' to be a bit more acceptable since she definitely needed a lesson. Simon Paisley Day made Petruchio a complex character, both cruel yet also almost respectful of Katherina. Although his methods of starvation, sleep deprivation and humiliation are cruel beyond account, he subjects himself to them as well. Also, he is rude to everyone, treats everyone with a humorous contempt and at the end seems to have genuine affection and even respect for his wife. 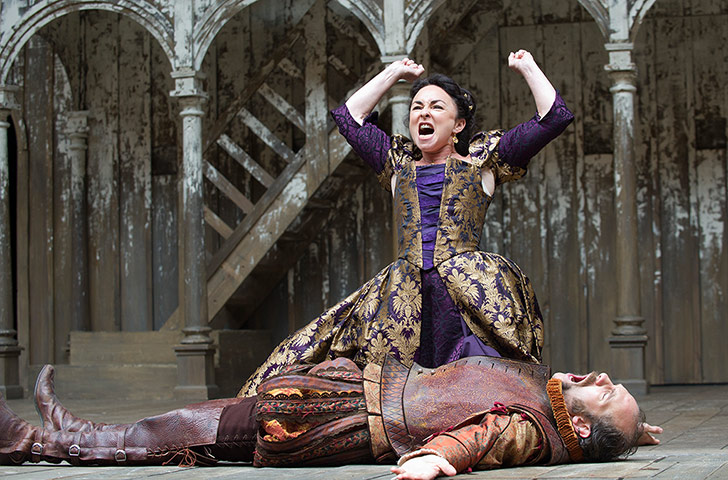 The final scene, Katherina's final speech, is, I believe, what everyone fears about this play. Here this headstrong woman is the first to come running at her husband's command and in a speech to her sister and the audience tells us women should be obedient to their husbands, that their happiness lies in pleasing the other and that they owe it to them for protection. She then places her hand on the floor, for Petruchio to step on if he so pleases. Thankfully here, Petruchio's love comes through and he kneels and kisses her. There was a silence in the Globe during this speech, as if no one was quite sure what to do with themselves. I believe that it is important to see this speech as part of the time and class it was written in and for. Women of noble birth during Shakespeare's lifetime could indeed stay at home, safe and protected, often uneducated to the real dangers and workings of the world. Their husbands simply did know better and even I think it is only fair to be nice to your husband when he comes home after fighting to keep you and everyone else safe. For women of the working classes back then and women nowadays this of course didn't count since they work just as hard as their husbands even though I might be tempted to say that the kind of dedication shown by Katherina and Petruchio for each other is lacking in many modern relationships.

The play left everyone with the right taste in their mouth. Slightly upset, but entertained and aware of the fact they just witnessed a brilliant Shakespeare play. The Globe is, in my humble opinion, the best place to see a Shakespeare play. The actors are so close, it is so interactive that Shakespearean English becomes no problem. Just to prove this point: we went to the Globe last night with a Dutch friend of my sister's. She has had 3 years of English education to Dutch standards, no Shakespeare, trust me. She, not once, looked bored or as if she didn't understand but had the night of her life. Is there anything better than a play that
breaches a language barrier and becomes enjoyable to all?