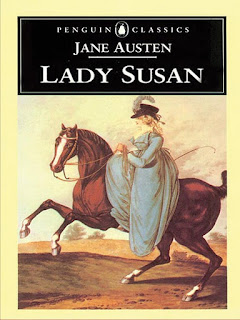 I read 'Lady Susan' ages ago and recently stumbled upon it again while perusing my bookshelves. I have always loved Jane Austen because her novels seem so human and real, especially in contrast with a lot of modern books, whose characters don't seem to act natural. They make decisions that seem unrealistic and seem to feel certain emotions to strongly and others not at all. Jane Austen's novels have characters that could have really existed. Take 'Pride and Prejudice'. The way the sisters interact is completely believable. Naturally, the two older ones who are closest in age are cllose, the youngest is terribly withdrawn and the middle two constantly battle for attention. Also, a female author who writes the following has to be amazing: 'There is a monstrous deal of stupid quizzing and common-place nonsense talked, but scarcely any wit'. That's a small word as to why I love Jane Austen.

'Lady Susan' is a short epistolary novel (see my post 'Epistolary what?') which means that in a way the reader's exploration is restricted. We do not know everything, there is no omniscient narrator who tells us what all the characters are thinking. Instead, we have their letters to each other, which offers us an insight into their games. 'Sense & Sensibility' was also originally written in this form, then called 'Eleanor and Marianne', but Austen changed it into prose as the epistolary form became less popular. I personally didn't mind reading the story trough letters, especially since the letters were always written from the perspective of the character, rather than simply a first-person narrative in present put in a letter. This way, a letter from Lady Susan might make you think one thing, yet the following letter by her sister-in-law Catherine Vernon would shed everything in a different light. This made the novel an entertaining read.

Lady Susan is a widow who is looking for a husband for both her and her daughter, whom she dislikes, whilst still flirting with a married man. She considers herself rather fashionable and smart and likes to play with men. Her letters therefore are rather witty and funny to read. She is very unlike the stereotypical 19th century female lead in a novel since she has no problem being domineering and taking advantage of others. Her daughter Frederica is neglected and terrified, especially when she finds out who she is to marry. The plot thickens when Frederica falls in love with the man lady Susan had intended for herself.

I really enjoyed the book as it has a very clever plot.The constant toying with others and scheme-making leads to a very satisfying end. Throughout the novel you can't help but take a fancy to Lady Susan. She seems to know exactly what men want and she has no problem playing into the stereotypes of 'hurt mother', 'poor widow' or 'seductress', whatever suits her cause best. Frederica is very much a minor character, a pawn in her game, yet she comes across as very humble and sweet. My favourite character was probably Catherine Vernon. She was very decisive and forms Lady Susan's opponent in the novel. They circle around each other, each trying to interfere in the others plans and she comes across as genuinely kind, especially to Frederica.

I could read this book again and again. It is witty, charming and touching all at once. Austen had written a very clever story with intriguing characters.
Posted by Juli Rahel at 6/17/2012 02:58:00 pm