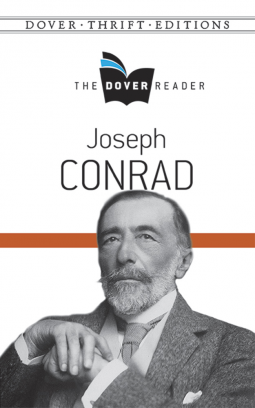 Joseph Conrad was the kind of author I was almost too prejudiced against to start reading. The "masses" have built up a lot of prejudice regarding the racist sentiments in his work although I have always found that those attitudes are severely judged within his work. So I was extremely happy to find a reader full of his work, especially one by Dover Publications who seem to specialize in bringing classics back. Thanks to Dover Publications and Netgalley for providing me with a copy of this book in exchange for a fair review.


Fluent from birth in French as well as his native Polish, Joseph Conrad (1857–1924) learned his third language, English, as an adult. And it was in English that he wrote his evocative stories and novels, drawing upon his experiences in the British and French navies to portray the struggles of humanity amid the world's vast indifference.

This anthology offers readers the essential Joseph Conrad, including his debut novel, Almayer's Folly. Other features include his political thriller, The Secret Agent, along with his most famous novel, Heart of Darkness, and a related account of an 1890 expedition, The Congo Diary. A selection of short stories includes "Youth: A Narrative," "An Anarchist," "An Outpost of Progress," and "The Secret Sharer."

It's difficult to write a comprehensive review about anthologies or readers such as this. As such the quality or merit of an author doesn't have to be discussed anymore since a dedicated anthology, a sort of 'greatest hits' collection so to say, proves that these are already accepted. However, as said above, Joseph Conrad is quite a conflicting author for many. His time in the Congo exposed him to the worst of humanity, a lot of which comes back in his writing. Too often he is cast aside as a racist author, but I'd have to disagree. Those opinions are definitely present in his writing, but they are always given to characters who are consequently judged by the book for those opinions. Just for the sake of exploring the consequences of Imperialism it is very worthwhile to read Conrad's work. Although nothing in this anthology is new or previously unseen material, it is good to have it all together in a single place.

The organization of this anthology is one of its main bonus points. The texts are arranged chronologically, moving from something almost akin to biographical material in 'The Congo Diary' during Conrad's time in Africa to his fictional works, spanning a time period from 1890 to 1909. Heart of Darkness, arguably Conrad's most famous novel, is at the very heart of the anthology and it becomes beautifully clear how many themes play in the novel which worked throughout his whole career. Some anthologies organise themselves around themes, which has its own advantages, but by showing an author's actual chronological journey reveals a lot about how their writing style developed etc. For example, reading 'Almayer's Folly', Conrad's first novel, before moving on to Heart of Darkness will show how much he has progressed.

I give this reader...

Personally I was already a fan of Joseph Conrad before this anthology, but I enjoyed being able to see his progression as an author. Not all of his work was entirely to my taste but Dover Publications continues to bring out great anthologies. I'd recommend this to fans of Imperial literature and, naturally, fans of Joseph Conrad.
Posted by Juli Rahel at 9/16/2015 11:24:00 am