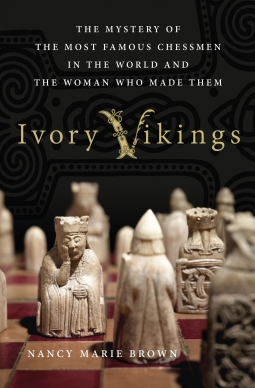 This week I'm using Ivory Vikings: The Mystery of the Most Famous Chessmen in the World and the Woman Who Made Them (long title, I know) by Nancy Marie Brown. I have always been fascinated by the Lewis Chessmen so I was really excited to see a book about them on Netgalley, especially since it seems to argue a woman made them.

In the early 1800's, on a Hebridean beach in Scotland, the sea exposed an ancient treasure cache: 93 chessmen carved from walrus ivory. Norse netsuke, each face individual, each full of quirks, the Lewis Chessmen are probably the most famous chess pieces in the world. Harry played Wizard's Chess with them in Harry Potter and the Sorcerer's Stone. Housed at the British Museum, they are among its most visited and beloved objects.

Questions abounded: Who carved them? Where? Nancy Marie Brown's Ivory Vikings explores these mysteries by connecting medieval Icelandic sagas with modern archaeology, art history, forensics, and the history of board games. In the process, Ivory Vikings presents a vivid history of the 400 years when the Vikings ruled the North Atlantic, and the sea-road connected countries and islands we think of as far apart and culturally distinct: Norway and Scotland, Ireland and Iceland, and Greenland and North America. The story of the Lewis chessmen explains the economic lure behind the Viking voyages to the west in the 800s and 900s. And finally, it brings from the shadows an extraordinarily talented woman artist of the twelfth century: Margret the Adroit of Iceland.

Tuesday Intros and Teaser Tuesdays are hosted by Diane over at Bibliophile by the Sea and MizB over at A Daily Rhythm.

'In the early 1800s, on a golden Hebridean beach, the sea exposed an ancient treasure cache: ninety-two game pieces carved of ivory and the buckle of the bag that once contained them. Seventy-eight are chessmen - the Lewis Chessmen - the most famous chessmen in the world. Between one and five-eights and four inches tal, these chessmen are Norse netsuke, each face individual, each full of quirks: the kings stout and stoic, the queens grieving or aghast, the bishops moonfaced and mild. The knights are doughty, if a bit ludicrous on their cute ponies. The rooks are not castles but warriors, some going berserk, biting their shiels in battle frenzy. Only the pawns are lumps - simple octagons - and few at that, only nineteen, though the fourteen plain disks could be pawns or men for a different game, like checkers. Altogether, the hoard held almost four full chess sets - only one knight, four rooks, and forty-four pawns are missing - about three pounds of ivory treasure.' p.1

I realize this is quite a long introduction, but I really like Brown's description of the chess pieces. There is quite some detail there and her description is so,,, emotive, if that makes sense? The figure you can see on the cover is a queen, which are among my favourites in the whole set.


'Carved out of one large stone, of the soft reddish volcanic tuff found on the hill across the river from Skaholt, Bishop Pall's sarcophagus is simple and elegant, its rounded lines ornamented only by two cylindrical knobs projecting from the broader end.' p.140

As a student of Icelandic history I have a vague understanding of who Bishop Pall is, but again it was the description of the sarcophagus which really held my attention during this teaser!

Does Ivory Vikings sound like your kind of book? And had you heard of the Lewis Chessmen before?