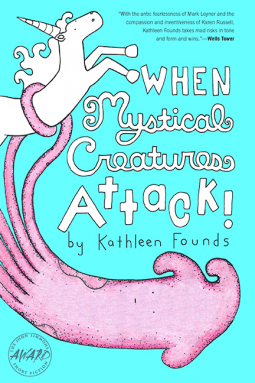 I requested When Mystical Creatures Attack! a very long time ago because I was absolutely fascinated by the blurb. Something about it really drew me in and I am ashamed of myself for never getting to it until now. This novel is something else! Thanks to the University of Iowa Press and Netgalley for providing me with a copy of the book in exchange for an honest review.


In When Mystical Creatures Attack!, Ms. Freedman’s high school English class writes essays in which mystical creatures resolve the greatest sociopolitical problems of our time. Students include Janice Gibbs, “a feral child with excessive eyeliner and an anti-authoritarian complex that would be interesting were it not so ill-informed,” and Cody Splunk, an aspiring writer working on a time machine. Following a nervous breakdown, Ms. Freedman corresponds with Janice and Cody from an insane asylum run on the capitalist model of cognitive-behavioral therapy, where inmates practice water aerobics to rebuild their Psychiatric Credit Scores.

The lives of Janice, Cody, and Ms. Freedman are revealed through in-class essays, letters, therapeutic journal exercises, an advice column, a reality show television transcript, a diary, and a Methodist women’s fundraising cookbook. (Recipes include “Dark Night of the Soul Food,” “Render Unto Caesar Salad,” and “Valley of the Shadow of Death by Chocolate Cake.”) In “Virtue of the Month,” the ghost of Ms. Freedman’s mother argues that suicide is not a choice. In “The Un-Game,” Janice’s chain-smoking nursing home charge composes a dirty limerick. In “The Hall of Old-Testament Miracles,” wax figures of Bible characters come to life, hungry for Cody’s flesh.

Set against a South Texas landscape where cicadas hum and the air smells of taco stands and jasmine flowers, these stories range from laugh-out-loud funny to achingly poignant. This surreal, exuberant collection mines the dark recesses of the soul while illuminating the human heart.

As the blurb says, When Mystical Creatures Attack! is made up of a lot of different types of text narration, essays, fictional short stories, journals etc. Founds choice to use so many different mediums really sets her novel apart since reading it feels incredibly refreshing. Each chapter holds a surprise, each story-line is told in a different style, potentially by a different character etc. It is very refreshing to read a novel which is so willing to explore different and new styles of writing, explore with multiple genres within a novel and have such a variety in characters. All of this makes When Mystical Creatures Attack! an utterly delightful read, almost impossible to put down. Even when the story seems to simply be rambling on it's a true joy to read. Founds also doesn't shy away from not chasing after a happy ending, allowing stories to take their natural cause whether that's pleasing to the reader or not. It's daring and therefore one of a kind.

There is something absolutely magical in reading about characters who are open about their problems and the damage in their lives. Too often trauma is used by authors to explain a character's erratic actions, without actually going into this trauma. Unfortunately this has led to especially mental health issues becoming an excuse for bad behaviour and to it being over-used and thereby also abused. Founds is incredibly honest in a way that you don't read often. Through her use of the different mediums she manages to really get into her characters' minds and show how mental illness can play with a person. It's at times chilling to read and even horrifyingly recognizable at other times.

Somehow this novel feels incredibly young. Whether it is Founds ability tap into youth culture and their specific issues, or the variety of mediums used, When Mystical Creatures Attack! hits all the right notes. Especially the essays from Ms. Freedman's school children at the start of the novel show Founds' skill at slipping into her characters' skin and making a reader perfectly believe in her characters being real. Founds plays with the notion of fiction, making the reader wonder what is real and what isn't, what is in characters' heads and what is actually happening within the story. And what of this story actually applies to real life? I've always been an advocate of literature making readers question themselves and the lives they live and When Mystical Creatures Attack! is a perfect book, in that respect.

When Mystical Creatures Attack! is one of my favourite reads this year. Kathleen Founds really breaks boundaries in her book, moving fluidly between writing styles, mediums and genres. It's a fascinating story with beautiful characters that deserve your attention. I'd recommend this to fans of experimental fiction and confrontational reads.