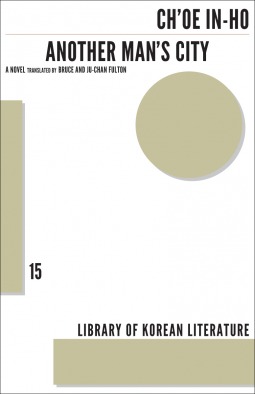 This week I've been reading a number of books on and off, and this one is one one of them. Another Man's City is one of the Library of Korean Literature-series of books. I read another book out of this series, The Republic of Užupis by Haïlji, Bruce and Ju-Chan Fulton, not too long ago and really enjoyed it. The point of this blog is very much the broadening of my literary horizons so I love finding foreign literature in translation. I never thought I'd find such Kafka-esque literature in Korea but Another Man's City is really blowing me away.


Another Man's City is structured as a virtual-reality narrative manipulated by an entity referred to variously as the Invisible Hand or Big Brother. The scenario is reminiscent of Peter Weir's 1998 film The Truman Show and Kazuo Ishiguro's novel The Unconsoled. The novel begins with a series of seemingly minor juxtapositions of the familiar and the strange, as a result of which the protagonist, K, gradually finds himself inside a Matrix-like reality populated with shape-shifting characters.

Tuesday Intros and Teaser Tuesday are hosted by Diane over at Bibliophile by the Sea and MizB over at A Daily Rhythm. 380

What the hell? K groped the fuzzy boundary between sleep and wakefulness for an answer - what had awakened him?His alarm clock. The strident ring a desperate cry letting the world know of its existence. Again the shrill clamor.Dammit! K didn't like being woken up. He fumbled at the nightstand, found the alarm clock, silenced it.' 1%

I liked this beginning because it immediately pulls you into the character's immediate sensations. Nothing is worse than the alarm clocks going off in the morning and I could sympathize with K from the get go. But trust me, from here it only gets weirder!

'That spider woman was not Janus, and Janus, whether a man or a woman, was not the spider woman. In that case, was Janus, the place, that is, part of the hour-and-a-half gap in the filmstrip of his memory?' 15%

Ok, so I have chosen the weirdest quote I could find on the page, just to give you a taste of why I'm calling this book Kafka-esque. Janus is a two-faced god, in this case one male and female. It's also a nightclub in this book and K is desperate to figure out what happened the night before.