Review: 'The Girl in the Road' by Monica Byrne 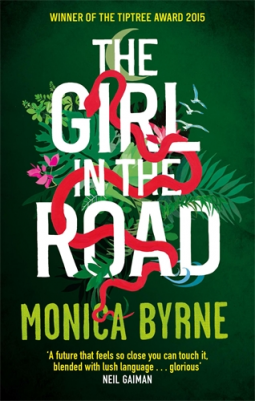 The Girl in the Road is a novel I won't forget very quickly. Sometimes novels come at just the right time and that is definitely the case with Monica Byrne's novel. There is so much to it which is relevant and interesting that I am ecstatic to have had the chance to read it. Thanks to Little, Brown for providing me with a copy of this book in exchange for an honest review and letting me be part of the novel's blog tour.

Stunningly original and wildly inventive, The Girl in the Road melds the influences of Margaret Atwood, Neil Gaiman, and Erin Morgenstern for a dazzling debut.

Meena, a young woman living in a futuristic Mumbai, wakes up with five snake bites on her chest. She doesn't know how or why, but she must flee India and return to Ethiopia, the place of her birth. Having long heard about The Trail -- an energy-harvesting bridge that spans the Arabian Sea -- she embarks on foot on this forbidden bridge, with its own subculture and rules. What awaits her in Ethiopia is unclear; she's hoping the journey will illuminate it for her.

Mariama, a girl from a different time, is on a quest of her own. After witnessing her mother's rape, she joins up with a caravan of strangers heading across Saharan Africa. She meets Yemaya, a beautiful and enigmatic woman who becomes her protector and confidante. Yemaya tells Mariama of Ethiopia, where revolution is brewing and life will be better. Mariama hopes against hope that it offers much more than Yemaya ever promised.

As one heads east and the other west, Meena and Mariama's fates will entwine in ways that are profoundly moving and shocking to the core. Vividly imagined and artfully told, written with stunning clarity and deep emotion, The Girl in the Road is a true tour de force.

It's hard to describe exactly what kind of book The Girl in the Road is because it seems that Monica Byrne consciously made it close to impossible to actually label her book. The novel moves very fluidly between different genres, different types of narration and between two characters who are wildly different, or are they? As Meena finds herself on the Trail for her journey, the reader finds themselves on equally shaky ground, edging onwards, unsure but desirous to get to the end. In parts the story line of The Girl in the Road can get confusing, but it's all part of the magic of the novel. Byrne doesn't want to make it easy for her readers and the way that her narrative shifts is very innovative at times. When her characters struggle to make sense of their surroundings so does the reader and this makes The Girl in the Road a really engrossing and immersive read.

The Girl on the Road is a novel that not everyone will enjoy. There are a number of scenes and moments throughout the story which will stroke people the wrong way, largely because Byrne doesn't shy away from showing the violence of humanity. It is precisely for this reason, however, that Byrne's novel can rightly be said to belong next to Margaret Atwood's work. Some of the passages in this novel are shocking, yes. Things happen that shouldn't be happening but because they do in our world they happen in our literature. Whenever people argue in favour of "realistic literature" this is not what they mean. Sometimes we just want to read stories in which everything will be allright, where the world is seen through rose-tinted glasses. But every once in a while a book has to come around to confront you a little bit, shake you up so you put the glasses down and have another look at our world. Byrne's characters aren't necessarily loveable, rather they are understandable. They are girls and women who do things wrong, who make serious mistakes and deceive themselves. Byrne is one of a number of female authors in the last few years who seem to have purposefully left behind the "pure and innocent girl"-stereotype. Byrne's women are as complex and confused as her men and in her exploration of them she makes statements about all humans.

Monica Byrne's writing style in The Girl in the Road is beautiful. Imagining a global society only a few decades beyond ours, Byrne creates a world in which technology has advances but along a natural path. Culturally, Byrne imagines a multicultural world which means her narrative is infused with words from other languages which one slowly starts understanding throughout the novel. Nothing that happens in Byrne's world feels completely impossible or out of place and yet there is an eerie sense of other-worldliness to it as well. The world that Meena and Mariama move through is described very vividly, whether it's descriptions of emotions or of the African landscape the latter travels through.The shift in pacing throughout the novel works really well, never letting the reader completely settle in. As said above, the novel very much feels like the Trail itself, constantly presenting you with new challenges and obstacles. The end is ever so worth it though!

I absolutely loved The Girl in the Road. It was a novel that didn't let me go, that kept drawing me back in. Monica Byrne writes a fascinating story with characters that are incredibly interesting. This is a novel you have to stand open for but I wouldn't be surprised if The Girl in the Road becomes a classic. I would actually recommend this to fans of Margaret Atwood, readers who want to be challenged by their reads.
Posted by Juli Rahel at 9/09/2015 10:07:00 am