An Evening with Christopher Rush and Topping & Co. Booksellers 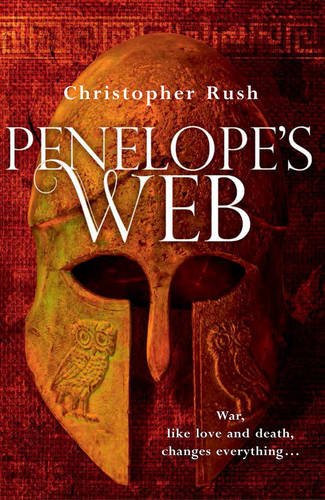 Last Friday I had the pleasure of attending an event at the St. Andrews branch of Topping & Company Booksellers, celebrating the upcoming release of Christopher Rush's new novel Penelope's Web. In his new novel Rush retells the stories of the Iliad and the Odyssey from Odysseus' and Penelope's point of view, bringing the humanity back into this epic tale.


Odysseus returns to Ithaca after nearly twenty years, half of it spent as a soldier and the other half as a soldier of fortune. During his absence his wife Penelope remains faithful, despite Odysseus being missing and presumed dead, but when her husband suddenly reappears he confronts those who have been trying to seduce his wife and kills them all. This is a novel about war and peace, about how returning soldiers can find peace more horrible than war, and home more hellish than the battlefield.

'Penelope's Web is a book about war that, like The Naked and the Dead or Catch-22, manages to be about very much more… Christopher Rush has written a profound meditation not just on our present condition but on how we all live inside 'the web', how we weave fact, the way we make and unmake fictions, and how we choose to live and die by them'--Brian Morton, Scottish Review of Books

Crucial to a fun reading event is atmosphere and if there is one thing a Topping & Co. store can provide, aside from books, it's atmosphere. Surrounded by walls lined with full wooden bookcases (the kind that come with a ladder!) it's easy to get in the mood for a book reading. If you're then also provided with a glass of wine on the house nothing stands in the way of a good evening.

The night started with Christopher Rush addressing the audience, relating his journey as a writer and his inspiration for Penelope's Web. Christopher Rush proved to be not just a great writer but also a great speaker, easily holding the audience captive with his stories. Rush covered a lot of topics, from his childhood education in Greek by (present and non-present) teachers, to the, beautifully phrased, 'ocean of European myth'. It's always gratifying to hear an author describe their work process and inspiration sources.The way Rush talked about the web, of weaving being a style of story-telling that retains stories better than manuscripts can sometimes (think Tapestry of Bayeux!) was fascinating. This web of words has also spread across all of Europe, making the Odyssey relevant for this born Fifer.

After entertaining the audience with his personal stories Rush moved on to reading passages from his novel, giving everyone a taste of Rush's ancient Greece. Where Homer keeps a cool distance from his characters, immortalizing them as almost God-like heroes, Rush takes a more human approach, showing these legendary heroes to be just like everyone else. They are warriors, rough and full of hard edges, and behave as such. Rush's language is unapologetic but also very lyrical in places. Without echoing Homer Rush nonetheless manages to capture the same magic.

Overall it was a very enjoyable evening with great company! For anyone who ever spends some time in St. Andrews I highly recommend dropping by Topping & Co. This evening with Christopher Rush was part of the St. Andrews Literary Festival which has a lot more interesting author events coming up. I myself will be visiting two more, but do follow the Twitter hashtag #StABookFest.
Posted by Juli Rahel at 9/21/2015 11:05:00 am