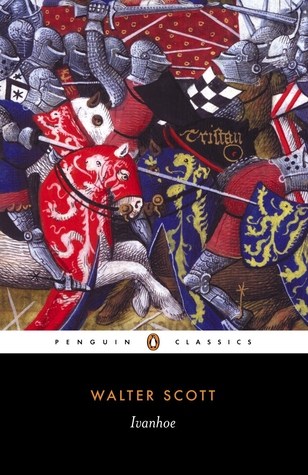 Sometimes the Universe comes together and lets you read a book you've been trying to find the time for for a University module. The Universe came together for me and I got to read Ivanhoe a few weeks ago. As a Medievalist it's almost my duty to read this novel and pass judgement on its use of the Middle Ages, so here I am.

Banished from England for seeking to marry against his father's wishes, Ivanhoe joins Richard the Lion Heart on a crusade in the Holy Land. On his return, his passionate desire is to be reunited with the beautiful but forbidden lady Rowena, but he soon finds himself playing a more dangerous game as he is drawn into a bitter power struggle between the noble King Richard and his evil and scheming brother John. The first of Scott's novels to address a purely English subject, Ivanhoe is set in a highly romanticized medieval world of tournaments and sieges, chivalry and adventure where dispossessed Saxons are pitted against their Norman overlords, and where the historical and fictional seamlessly merge.

For more than seventy years, Penguin has been the leading publisher of classic literature in the English-speaking world. With more than 1,700 titles, Penguin Classics represents a global bookshelf of the best works throughout history and across genres and disciplines. Readers trust the series to provide authoritative texts enhanced by introductions and notes by distinguished scholars and contemporary authors, as well as up-to-date translations by award-winning translators.

Scott is credited with making the Middle Ages popular again, with saving it from being seen as a terrible and dark time in human history that has nothing redeemable to it. Of course this is not down to just Scott, but his Waverley-novels and especially Ivanhoe were a major part of it. Setting his novel in the 12th century, Scott used his extensive historical and literary knowledge to fashion a credible medieval setting for his story. The Medievalist will easily pick out certain things that aren't originally 12th century but for any "casual" reader Scott's medieval England will feel true and interesting. However, it might also feel too intense because his descriptions can feel like museum info. Whether it's the detail of a belt buckle or an explanation of the architectural benefits of a certain type of tower, Scott will tell you almost everything. For some readers this'll be great because it adds to the story. For others it will become too much about four pages in. As far as historical fiction goes, it falls significantly onto the historical side in that sense.

Scott can also be credited not only with reviving interest in the Middle Ages but also in "creating" the Middle Ages. Bringing in certain stock characters from what children now know as 'medieval', Richard Lionheart, Prince John etc., reading Ivanhoe feels like a return to those childhood stories. What one needs to realise though is that the reason these stories are familiar is because Scott introduced many of their components into popular culture. I'm trying very hard not to spoil the plot of the novel here, but by reading Ivanhoe everyone will find themselves recognizing story elements and what some think of as the mythology of England.

Critics have, for a while, said this book was mainly intended to entertain boys and it's still a surprise to me that someone came to that conclusion because the women in Ivanhoe were incredibly interesting. Rowena feels like a typical "medieval" heroine, a template for future portrayals of Maid Marian. She is royal, she is commanding (usually) and, above all, she is waiting. She is the kind of seeming passive female character who could wheel a lot of influence in the narrative and yet doesn't. She has a number of moments where she feels powerful, but she is also absolutely overshadowed by Rebecca, one of the two Jewish characters in Ivanhoe. I'll discuss the racial aspect of the book later, but Rebecca is very strong within herself. She is a character who is self-contained, whose actions are motivated by her own desires and thoughts rather than compelled. She is potentially the only character who comes out of Ivanhoe looking like a good person. No matter how much garbage other characters throw at her she remains composed and independent and, by that, a real inspiration.

The main thing that can turn modern readers off Ivanhoe is the attitude his characters have towards the Jewish population of England. Although the anti-Semitism shown is historically accurate both for the time period about which he writes and even within which he writes, it is no longer something we accept. So this gives a reader two choices: either accept it as a fascinating insight into how common racist attitudes can become and how they show themselves, or reject the book. I'd advise the former, especially since, as mentioned above, Rebecca is the main treasure of this book. Her being Jewish continually comes back to harm her, whereas she never lets herself be defined by it. Scott clearly has sympathy for her and so did his initial audience which demanded a rewrite of the end of the book after its release to favour Rebecca. (See how hard it is not to spoil this?) So, we have a classic here in which a lot of characters are racist, to varying extents, and where the narrator isn't necessarily outright judging it. Personally it reminded me a lot of Heart of Darkness in that sense, which is often outrightly rejected by readers for its perceived intrinsic racism. But I think it's vital to read novels like this as a reminder how easy it is to fall into certain traps.

I really enjoyed reading Ivanhoe, a lot more than I was expecting even. It's not necessarily an easy read and its density can become a bit much at times. It's a rather rewarding read, however, and it will have you on the edge of your seat at many times. I'd recommend this to fans of historical fiction.
Posted by Juli Rahel at 3/21/2016 10:21:00 am