'War and Peace' Read Along

The last two weeks I felt a bit of a gap in my life as I had no massive tome of a classic to read now that I've finished Les Miserables. So I decided that nothing would be better than picking a new one and why not, then, the second biggest one I own? I hope you'll join me as I move from French Classics to Russian Classics and try my hand at War and Peace by Leo Tolstoy, of course in translation. Whereas my French was too poor to get me through Les Mis, my Russian is so non-existent I probably couldn't even pick War and Peace out in a Russian bookstore.

When I made my 100 Classics list I decided that this novel by Tolstoy simply had to be a part of it for the same reason that Les Mis had to be on there. It's a key novel in world literature and has influenced countless of authors since. Aside from that, the story also has a grip on popular culture, with endless adaptations gracing our TV screens. So, what is War and Peace actually about? 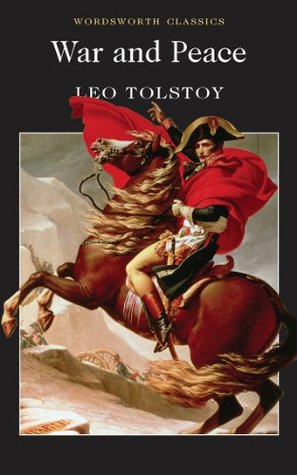 Tolstoy's epic masterpiece intertwines the lives of private and public individuals during the time of the Napoleonic wars and the French invasion of Russia. The fortunes of the Rostovs and the Bolkonskys, of Pierre, Natasha, and Andrei, are intimately connected with the national history that is played out in parallel with their lives. Balls and soirees alternate with councils of war and the machinations of statesmen and generals, scenes of violent battles with everyday human passions in a work whose extraordinary imaginative power has never been surpassed.

The prodigious cast of characters, seem to act and move as if connected by threads of destiny as the novel relentlessly questions ideas of free will, fate, and providence. Yet Tolstoy's portrayal of marital relations and scenes of domesticity is as truthful and poignant as the grand themes that underlie them.


So, I will be reading War and Peace from now on. I will start out trying to read 10 chapters a week and if, as was the case with Les Mis, I find that I can do more and that the reading is going a bit slow, I might switch it up to 20 chapters a week.