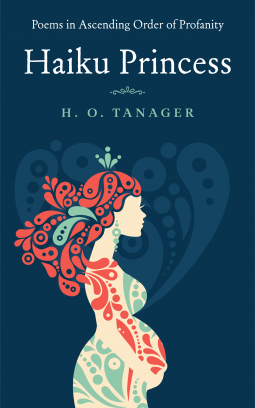 The haiku is one of those forms of poetry which sometimes I love and sometimes simply don't get. So when I saw the chance to explore this form once again but now with a distinctly modern seeming edge to it, I decided the time was right. Thanks to HO. Tanager Press and Netgalley for providing me with a copy of this book in exchange for an honest review.


Traditional haiku - at least the most interesting of the genre - includes the "volta," or "turn," a rhetorical shift or dramatic change in thought or emotion. Pairing modern, slantwise thoughts with Victorian images, Haiku Princess expands on the idea of the "volta" of a poem to include a visual layer... because it just seemed right.

Paired with Victorian illustrations, conveniently ordered from least-to-most profane (as interpreted by the author), and written by a Haiku Deathmatch Champion, these poems have been specially selected not to bore you, and perhaps make you wise.

I was surprised to find how much I enjoyed reading Tanager's haikus in Haiku Princess. The haiku form is one which has always felt abstract to me, in the sense I was never quite sure what the point of them was. Since I'm intensely familiar with the Shakespearean sonnet, for example, so reading and appreciating that comes a lot more natural. The haiku is fascinating, however, in how it's both a strict and a loose form. On the one hand it always has 17 on or syllables divided into three lines of 5, 7 and 5 syllables. On the other hand the haiku relies on juxtapositioning two unrelated images and having it make sense. In the case of Tanager's Haiku Princess the haikus always seem to go in a different direction than I was expecting while making perfecting sense within themselves. As such, I really enjoyed them because each three line-haiku was a unit of its own. However, Haiku Princess also works as a collection.

Split into five sections, 'Haiku of the Cradle', 'Haiku of the Maiden', 'Introducing the Lady Ku', ''Ku of the Crone' and 'Holy One'. it felt like Tanager had split Haiku Princess to purposefully follow the growth of girl to woman, the profanity and honesty growing alongside her. 'Haiku of the Cradle' feels relatively innocent whereas the first haiku of 'Haiku of the Maiden' immediately confronts the reader with an unabashed sexuality. And it works, the way one section moves into the next. The Victorian illustrations seem to go hand in hand with the haikus as well, even if they initially seem to not fit them at all. There's something sugary sweet about some of them which contrasts nicely with the more acerbic tone of the haikus. The design of the collection, then, the way the font, haiku and illustrations come together, really adds to the enjoyment of Haiku Princess.

There's something amazing about how profane and cheeky some of these haikus are. Tanager purposefully pushes the envelope on what is usually said and what is seen as appropriate. It's even more surprising to see how squeamish you can be when something is put bluntly on paper in just three lines that usually you hardly mention to friends. Haiku Princess, then, is definitely not for everyone. Not only will you have to be able to appreciate the haiku form, you'll also have to be open to being a little bit shocked and prodded by Tanager. If you read one haiku after the other you'll finish Haiku Princess in 10 minutes but the whole point of reading poetry is to let each sink in, to maybe reread them and let them work in. Don't ask too many questions of a haiku, is my tip. I really enjoyed the freedom of Haiku Princess and the fact that something like it can exist.

I greatly enjoyed reading Haiku Princess, even if I didn't always feel like "I got it". Tanager is beautifully cheeky in these haikus and you'll either enjoy it or not. Hence my rating since it's such a marmite-esque collection. You're gonna love it or hate it, but if you consider yourself an adventurous reader I'd definitely recommend Haiku Princess to you.
Posted by Juli Rahel at 3/18/2016 10:33:00 am