Review: 'Wrath of the Furies' by Steven Saylor 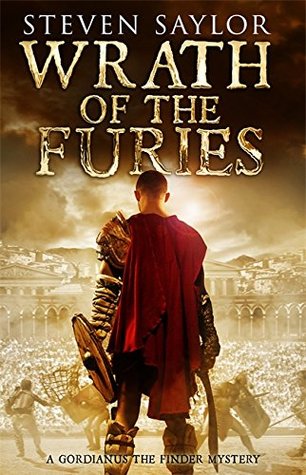 From an early age on I have been fascinated by Ancient Greek, its legends and the rise and fall of the Roman Empire. I must have devoured countless of books about it so when the chance came to take a peak at another series focusing on the latter I of course said yes. Thanks to Constable for providing me with a copy of this book in exchange for an honest review.


In 88 B.C., it seems as if the entire ancient world is at war. In the west, the Italian states are rebelling against Rome; in the east, Mithridates is marching through and conquering the Roman Asian provinces. Even in the relatively calm Alexandria, a coup has brought a new Pharaoh to power and chaos to the streets. The young Gordianus has been waiting out the chaos in Alexandria, with Bethesda, when he gets a cryptic message from his former tutor and friend, Antipater. Now in Ephesus, as part of Mithridates' entourage, Antipater seems to think that his life is in imminent danger.

To rescue him, Gordianus concocts a daring, even foolhardy, scheme to go "behind enemy lines" and bring Antipater to safety. But there are powerful, and deadly forces, at work here, which have their own plans for Gordianus. Not entirely sure whether he's a player or a pawn, Gordianus must unravel the mystery behind the message if he's to save himself and the people he holds most dear.

Central to Saylor's Wrath of the Furies are two characters: Gordianus, a young Roman hiding out in Alexandria at the beginning of the novel, and Antipater, once a poet and now in mortal danger from Mithridates. The narrative switches between these two narrators, with the focus lying mainly on Gordianus. Part of Antipater's story is told through fragmented diary entries which give the reader a sense of what kind of a man both Antipater and Mithridates are, as well as making it clear that the Mediterranean is indeed in the middle of an intense conflict. Gordianus' side of the narrative is told through pretty straight-forward third person narrative, although occasionally it feels like it's told in hindsight. A highlight of this book is its mobility between the different nations and peoples that lived in the Mediterranean around that time. Whether it's Alexandria, Rome or Egypt, Saylor creates exciting surroundings and describes them beautifully. The fact that one of the few female characters we have is Bethesda and that she is a slave was a bit of a let down, but her character was one of my favourites nonetheless.

With Wrath of the Furies Saylor brings together, arguably, two of his ongoing series. On the one hand it forms a prequel to the series Roma Sub Rosa which is currently 12 books long and feature an adult Gordianus. On the other hand it is the third novel in the Ancient World series which focuses exclusively on the adventures of the young Gordianus. As such, this novel is only one step into a larger world. Saylor does quite well in making the novel feel like it stands alone, explaining what has come before where it is relevant but not dwelling on it too long. However, there is the constant hinting at more which means that although Wrath of the Furies can be read alone it leaves you with a sense that you're missing out if you haven't read his other books.

Saylor is clearly very knowledgeable of the time he is writing about. There are loads of little hints and details throughout the book which show how comfortable he is within that knowledge as well. As such, it's no surprise that his series are so popular. I always enjoy it when historical fiction isn't just fun to read, but also interesting and something you can learn from. However, for me the tone of the novel felt too modern. The characters' speech could be transposed to any modern city nowadays and not really feel that different. On the one hand that might be easier for readers but on the other hand it takes away something of the magic of the distant and fascinating past. Similarly, I felt slightly let down by the lack of poetic language in Antipater's diary entries. He keeps reminding the reader he is indeed a poet but he doesn't sound like it but hardly makes any allusions to legends, myths etc. apart from a very nice passage on the Furies. Since my passion for this time came from the myths themselves I love rediscovering them in modern fiction, but perhaps Saylor's writing style is meant for a younger audience.

I enjoyed reading Wrath of the Furies and Saylor's writing was pleasantly straightforward. However, as a lover of myths and legends I occasionally missed the more epic tone or the sense that this was still present at the time. However, it made for interesting historical reading. I'd recommend it to fans of Historical Fiction.
Posted by Juli Rahel at 3/03/2016 08:42:00 am