Review: 'The Secrets of Lizzie Borden' by Brandy Purdy 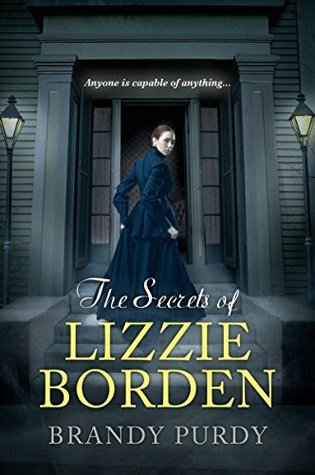 Lizzie Borden is one of those people who has moved into popular culture and about whom we actually don't know that much. Everyone knows what she did but not who she is and I think that's part of what has contributed to her legend so much. So seeing her reimagined by a 21st century female author is really interesting.
Thanks to Kensington Books and Netgalley for providing me with a copy of this book in exchange for an honest review.


In her enthralling, richly imagined new novel, Brandy Purdy, author of The Ripper’s Wife, creates a compelling portrait of the real, complex woman behind an unthinkable crime.

Lizzie Borden should be one of the most fortunate young women in Fall River, Massachusetts. Her wealthy father could easily afford to provide his daughters with fashionable clothes, travel, and a rich, cultured life. Instead, haunted by the ghost of childhood poverty, he forces Lizzie and her sister, Emma, to live frugally, denying them the simplest modern conveniences. Suitors and socializing are discouraged, as her father views all gentleman callers as fortune hunters.

Lonely and deeply unhappy, Lizzie stifles her frustration, dreaming of the freedom that will come with her eventual inheritance. But soon, even that chance of future independence seems about to be ripped away. And on a stifling August day in 1892, Lizzie’s long-simmering anger finally explodes…

Vividly written and thought-provoking, The Secrets of Lizzie Borden explores the fascinating events behind a crime that continues to grip the public imagination—a story of how thwarted desires and desperate rage could turn a dutiful daughter into a notorious killer.

As mentioned, not that much is really known about Lizzie Borden 'the woman'. Some of her circumstances are well-known but those can be interpreted by any author in whichever way they want. Whether Purdy went into writing The Secrets of Lizzie Borden with a set agenda in her mind or not, she gives Lizzie a personality and a history that at least attempts to offer an explanation for her actions. From the outset Purdy does this by putting the reader straight inside Lizzie's head via first person-narration. Whether this is a good thing comes down to a reader's personal preference, but it can make it more difficult for the author to give a proper overview of all the characters without breaking the first person-narration. Purdy manages to both give an idea of Lizzie's character and her hopes and dreams early on in the book, without losing track of where her story is heading and who she's talking about.

Purdy does not shy away from describing the intimate details of a woman's life, whether it comes down to menstruation, sexuality or raging anger. That won't necessarily be for everyone but it is refreshing to not see an author try to hint without being explicit, but rather just tell the story as she sees it. At times I felt that perhaps too many freedoms had been taken but then, everything fit within the story itself. The other main characters in the book don't come away very well, except perhaps for step-mother Abby. Both Lizzie's father, Andrew, and sister, Emma, seem to be characters full of spite and anger. Although sometimes especially Emma feels a little bit too dark, when Lizzie is being painted in such shades of moral grey, but she still makes for an interesting character.

One of the few times I've read a story about Lizzie Borden was Angela Carter's spin on her in her short story 'The Fall River Axe Murders'. Carter worked her magic on the popular tale and came out with something that seems equally aware of itself as The Secrets of Lizzie Borden is, but perhaps stays a bit more distant. Purdy gets straight into Lizzie and her thoughts and there is no way for the reader to escape where her story is going. Purdy's writing is at once very descriptive while managing to capture how stifling Lizzie's life was. This novel reminded me why I enjoy unreliable narrators so much. You know, as the reader, you're getting one character's point of view but because it's the main point of view of the novel you have to constantly question and consider what you read. It makes for a very engaging book.

The Secrets of Lizzie Borden makes for a great introduction to the popular mystery that is Lizzie Borden. Purdy dives right into her story and drags the reader right along with her. I found myself curious throughout how she would handle the end of the story and wasn't disappointed. I'd recommend this to fans of Suspense and Women's Fiction.
Posted by Juli Rahel at 2/01/2016 10:48:00 am