Review: 'Salt to the Sea' by Ruta Sepetys 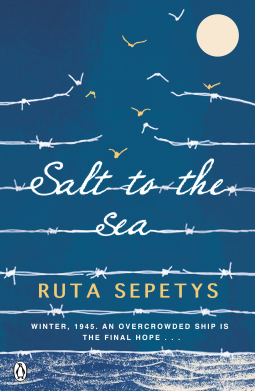 Every once in a while I stumble across a book which really gets to me and makes me pause. Although I thought Salt to the Sea might be one of those books I still wasn't expecting the force with which it hit me. Thanks to Penguin Random House and Netgalley for providing me with a copy of this book in exchange for an honest review.


It's early 1945 and a group of people trek across Germany, bound together by their desperation to reach the ship that can take them away from the war-ravaged land. Four young people, each haunted by their own dark secret, narrate their unforgettable stories. Fans of The Book Thief or Helen Dunmore's The Siege will be totally absorbed. This inspirational novel is based on a true story from the Second World War. When the German ship the Wilhelm Gustloff was sunk in port in early 1945 it had over 9000 civilian refugees, including children, on board. Nearly all were drowned. Ruta Sepetys, acclaimed author of Between Shades of Grey, brilliantly imagines their story.

One of the most fascinating things about Salt to the Sea is its structure. Sepetys follows a group of refugees trekking across Germany and from that group chooses her six main characters and her four narrators. These four are Joana, a Lithuanian nurse; Emilia, a Polish girl; Florian, a Prussian youngster; and Alfred, a young Nazi sailor. Each of these has a voice and a story which Sepetys brings to the reader. But rather than dedicate separate chapters to each of them, Sepetys lets their different voices take over almost randomly. When they're all in a room together the narration will switch between them, depending on where the narrative emphasis lies at that moment. It may sound like it could be confusing, but it actually makes the narrative incredibly deep and allows it to actually resonate. Any given moment will impact a number of characters and give the reader a true sense of the intensity of the moment.

With Salt to the Sea Sepetys has managed to take one of the biggest forgotten events of the Second World War and make it into a story everyone can empathise with. The torpedoing and subsequent sinking of the Wilhelm Gustloff is a major tragedy, killing over 9000 people and therefore vastly eclipsing the sinking of the Titanic. And yet it's practically forgotten. The fact it was a Nazi ship has added to that, creating a debate over whether one can call it a war crime if it was technically the "bad guys" that suffered. Sepetys takes the event away from this debate and makes it about the people, turning something historical into something personal. Historical Fiction can be a difficult genre to successfully write in because an author has to find a balance between representing history accurately and allowing a fictional narrative to develop. Sepetys finds that balance perfectly in Salt to the Sea. Her novel is also strangely relevant to the modern day. The horror of the Syrian refugee crisis is one that many of us only experience indirectly, hearing about it on the news or reading about it in a newspaper. Only every once in a while does an image filter through which hits all of us and brings home how serious this problem is. Last year an estimated 2,600 died, that we know of, crossing the Mediterranean. It would do well for us, as Europeans, to remember times when we ourselves were victims of war, suffered maritime catastrophe and forced to flee our homes.

The horror of the Second World War may be both the backdrop and the subject matter of Salt to the Sea, but at its heart are the people. Major props are also due to the enormous research Sepetys has done for this novel. Europe, especially Eastern Europe, towards the end of the Second World War was a mess, with people from all over Europe making their way, either as refugees or as armies. By having such a varied cast of characters Sepetys is able to actually show the complexity of the situation, the way in which all of Europe was involved and affected. Every character is also on a different side, wavering between protecting themselves and helping others. There will be characters you utterly despise, rightfully so, and those who you understand despite agreeing with. And then there are those who's portrayal by Sepetys will hit you right where it hurts. And that is how I ended up crying over this book at 2AM. But it was a good cry, one of those cathartic ones that allows you to appreciate the intensity of the novel in a different way.

Part of the strength of this novel lies in Sepetys ability to get into the minds of her characters and make the reader care for them. This largely comes down to her writing style, which finds a balance between being sensitive, brutally honest and deceivingly simple. You see, it's easy to show off while writing by constructing really complex sentences and using multiple syllable words, all in the hopes to impress a reader with the author's supposed intelligence. But true talent likes in choosing precisely those words that you know will hit the reader right where you want to, and often those words are the simplest ones. Part of Salt to the Sea is truly heart-breaking and Sepetys doesn't cover this up either by glossing over it or emphasising it for sensationalism. With Salt to the Sea Sepetys has won me as a major fan of her writing.

Sepetys combines great historical research with insightful emotional writing and produces an amazing novel. Salt to the Sea has to be my favourite novel I've read this year, also topping some of my favourites from last year. I'll definitely be rereading and recommending it, while holding my breath for Sepetys' next book.
Posted by Juli Rahel at 2/15/2016 01:10:00 am