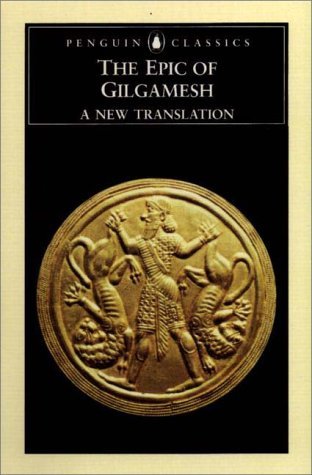 I've decided that there is something significantly missing from my readings of mythology, sagas and legend and that is The Epic of Gilgamesh, which is considered by many to be the first great work of literature but also the earliest. The fact it's on my 100 Classics list for The Classics Club really should've made me pick it up sooner!

The earliest surviving version of the "complete" tale (the combination of independent earlier stories) is from the 18th century BC! That is a long time ago and way before the creation of any of the West's most celebrated works of literature. Also interesting, some of the best kept versions of this tale were found in the ruins of the ancient library of the Assyrian king Ashurbanipal from the 7th century BC. I'm a big fan of ancient libraries and still slightly bitter over the destruction of the Library of Alexandria, despite that being a good few centuries ago.

Now, back to The Epic of Gilgamesh!


Originally the work of an anonymous Babylonian poet, who lived over 3700 years ago, this is the tale of one man's struggle against death. Not content with the immortal renown won by reckless deeds, the hero of the epic seeks immortality itself and journeys to the end of the earth and beyond.


Tuesday Intros and Teaser Tuesday are hosted by Diane over at Bibliophile by the Sea and MizB over at A Daily Rhythm! Some editorial notes, any word between square brackets is implied but not actually written down and elipses refer to words that are either too damaged to read or unknown.

(from 'The Standard Version of the Babylonian Gilgamesh Epic: 'He who saw the Deep')

[He] ... everywhere ...and [learnt] of everything the sum of wisdom. He saw what was secret, discovered what was hidden, he brought back a tale of before the Deluge.

He came from a far road, was weary, found peace, and set all his labours on a tablet of stone. He built the rampart of Uruk-the-Sheepfold, of holy Eanna, the sacred storehouse.' p.1

I thought I'd share a little bit more than just the first stanza so you got a bit more of a sense of what Gilgamesh is like.  I personally love legendary texts and the grand way in which they speak. It sounds so epic and grand! Also interesting, almost every civilization has a story of a great flood, i.e. the Deluge. I really like the sound of Gilgamesh so far, it's fascinating how engrossing most of it is despite being so old.

'"My friend, fixed [is my destiny,] people go to their doom before their time". At the very first glimmer of brightening dawn, Enkidu lifted his head, lamenting to Shamash.

Under the rays of the sun his tears were flowing: "I appeal to you, Shamash, for my life so precious: [as for] the hunter, the trapper-man, who let me be not as great as my friend:' p.57

Yup, I'm going to enjoy reading Gilgamesh! I mean, the line 'Under the rays of the sun his tears were flowing' is just absolutely beautiful, don't you think? Apparently Enkidu is Gilgamesh's friend and Shamash is the sun deity in the Assyrian pantheon.
Posted by Juli Rahel at 2/23/2016 08:54:00 am