Friday Memes and 'The High Mountains of Portugal' 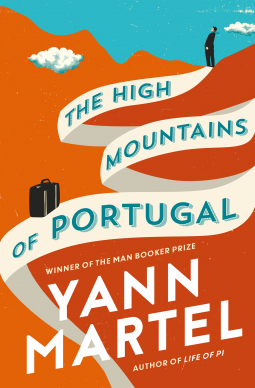 Today I'm using The High Mountains of Portugal by Yann Martel. I'm reviewing this book today as well and it's an absolutely mind-shifting read, moving between different stories and different characters quite abruptly. But despite not being an easy read I definitely enjoyed it. So I figures why not share it with you?


The long-awaited new novel from the Booker Prize-winning author of the worldwide phenomenon Life of Pi.To suffer and do nothing is to be nothing, while to suffer and do something is to become someone. He must strike onwards to the High Mountains of Portugal!

In Lisbon in 1904, a young man named Tomás discovers an old journal. It hints at the location of an extraordinary artefact that - if it exists - would redefine history. Travelling in one of Europe's earliest automobiles, he sets out in search of this treasure. Some thirty-five years later, a Portuguese pathologist finds himself at the centre of a murder mystery.

Fifty years on, a Canadian senator takes refuge in northern Portugal, grieving the loss of his beloved wife. But he comes to his ancestral village with an unusual companion: a chimpanzee.

Three stories. Three broken hearts. One exploration: what is a life without stories?

The High Mountains of Portugal takes the reader on a road trip through Portugal in the last century - and through the human soul.

Book Beginnings and Friday 56 are hosted by Gilion over at Rose City Reader and Freda over at Freda's Voice respectively.

The quotes below are from an ARC and may appear differently in the finalized product.


'Tomas decides to walk.From his modest flat on Rua Sao Miguel in the ill-famed Alfama district to his uncle's stately estate in leafy Lapa, it is a good walk across much of Lisbon. It will likely take him an hour. But the morning has broken bright and mild, and the walk will soothe him.' 1%

Tomas is a fascinating character and I'm just going to give you a slight tease here, he walks in a very interesting way. And the reason why is rather tragic.


'There is a forceful finality to her last sentence, the words of a woman who has so few wants left that the ones she still has are filled to the brim with her will.' 56%

I really liked this description! Sometimes when you only have one thing you want, you want that with all your soul. It's beautifully tragic and powerful at the same time.

So, this is me done for today. Do check out my review of The High Mountains of Portugal if it sounds like something you'd enjoy!