Friday Memes and 'The Book of Margery Kempe' 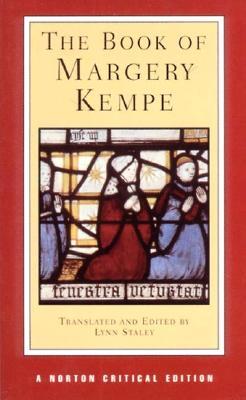 
The Book of Margery Kempe is a medieval text attributed to Margery Kempe, an English Christian mystic and pilgrim who lived at the turn of the fifteenth century. It details Kempe's life, her travels, her alleged experiences of divine revelation (including her visions of interacting with Jesus as well as other biblical figures), and her presence at key biblical events such as the Nativity and the Crucifixion.

Book Beginnings and Friday 56 are hosted by Gilion over at Rose City Reader and Freda from Freda's Voice, respectively! Hop over there to join in on the meme fun!

If this is your first introduction to Middle English then I apologize. Key to understanding it if it doesn't make a lot of sense is read it out loud because most of the words simply have a strange spelling but are still used nowadays. This is basically Kempe introducing her work, saying it will give comforting to sinners and show them all of God's work for their instruction. I can just feel that this will be a hoot of a read...

Kempe here describes a wife that has abandoned the "right path" but then Jesus comes to her and calls her back to his side. As he returns to heaven, the 'eyr', her eyes are opened again and become bright once more.