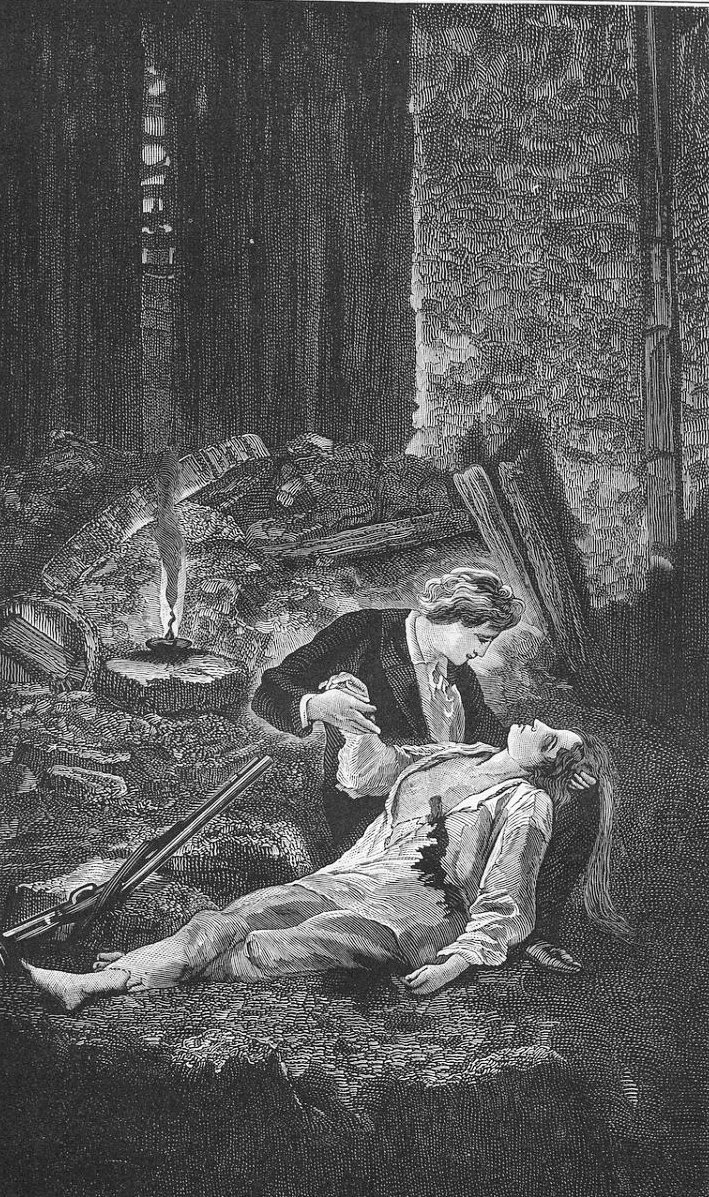 I gave out a general Spoiler warning when I started this series of posts since I'd be discussing the plot as I went forward without avoiding spoilers. Now that we're reaching the end of the book I'd like to hand out another warning since, well, the characters are going to be dropping like flies. Anyone who's seen the musical knows what I'm talking about, but since the book differs significantly there may still be things that are new and surprising. Last week we had poor M. Mabeuf who came as a surprise to me, and potentially you, so remember that I warned you of spoilers in the post below and the few remaining posts of this series.

Chapter Summary:
Last week we were all left hanging by Hugo as he kept stretching out the waiting at the barricade. By the end of this week's section we've reached the second attack on the barricade but not before we've encountered our second victim of the plot: poor Eponine. Initially I was very surprised at Eponine in the book but I've grown to love her characterization so seeing her go was bittersweet. Her last line, which I'm not going to share with you because I'm cruel, almost had me in tears. In her last minutes Eponine gives Marius a letter she had been keeping from him from Cosette, telling him where she and Jean Valjean are hiding. Marius sends Gavroche off with a message to Cosette which is intercepted by Valjean, who then makes his way to the barricade.

At the barricade the assault start again and this time there's a canon involved. There's some surprisingly technical talk about the curve of the cannon ball in relation to the distance of the canon to the barricade which seemed like exactly the kind of thing you'd distract yourself with when faced with a canon. We leave the barricade mid-assault, in the hope that maybe this time the book changes its mind and everything ends well.

Feel of the Chapters:
The mood of these chapters fluctuates a lot. First everyone is heroically strengthening the barricade and then there is a solemn speech about all those they'll leave behind. The Gavroche brings back some humour before the canon kills three men. Valjean appears as a saviour but then we are reminded of Cosette who will be all alone if neither him nor Marius return. This up and down can either work on your nerves or keep you on the edge of your seat and in my case it's the latter. I love the fact that Hugo is taking his time to describe this moment which is so momentous to his characters.

General Points:
Something Extra:
At a certain point Enjolras grows a little bit rapturous and dreams up a future for Europe where it will be united. He brings up the example of the Amphictyonic League which had too interesting a name for me not to look into it. This is a term from the Archaic period of Greek history before its famous city-states existed. The term amphictyony literally means 'league of neighbours'. Quite often these leagues or alliances would also be religious in nature, most noticeably in the most famous example of amphictyony, the Delphic Amphictyonic League which was apparently founded shortly after the Trojan War in support of the temples of Apollo and Demeter. It is exactly this League which Hugo refers to when he says:


'The amphictyons had two sittings a year, one at Delphos the seat of the gods, the other at Thermopylaem the place of heroes.' p.2002


'The spirit of revolution covered with its cloud this summit where rumbled that voice of the people which resembles the voice of God; a strange majesty was emitted by this titanic basked of rubbish. It was a heap of filth and it was Sinai.' p.1976

This quote describes the Saint-Antoine barricade set up during the June revolt by others. I loved the description of how this heap of rubbish is still a sign of hope and faith and that it belongs to the people.

I loved Enjolras' speech about equality and how instruction, i.e. education, is crucial to it. Most revolutions occur due to gross inequality and we ourselves are living in societies where the gaps between the rich and the poor are enormous, squashing the notion of equality under wads of cash.
Posted by Juli Rahel at 2/11/2016 12:43:00 pm