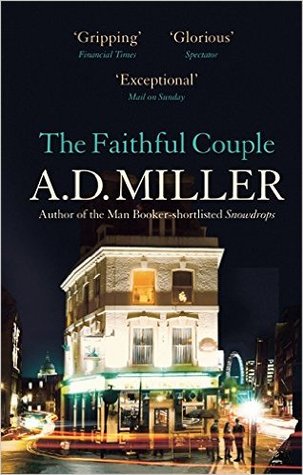 I'm really excited to be one of today's stops for the blog tour for The Faithful Couple. I love me some reads that combine different genre elements, whether it's suspense, mystery and drama. The Faithful Couple brings loads of different themes together but unfortunately not all of them always go together as easily as they should. Thanks to Abacus and Little, Brown for providing me with a copy of this book in exchange for an honest review.


Turn a betrayal inside out and you found its opposite, a secret and a bond. Perhaps that was what friendship came down to: a lifelong, affectionate mutual blackmail.

Neil and Adam, two young men on the cusp of adulthood, meet one golden summer in California and, despite their different backgrounds, soon become best friends. Buton a camping trip in Yosemite they lead each other into wrongdoing that, years later, both will desperately regret.

Their connection holds through love affairs, fatherhood, the wild successes and unforeseen failures of booming London, as power and guilt ebb between them.
Then the truth of that long-ago night emerges.

What happens when you discover that the friendship you can't live without was always built on a lie?


At the heart of The Faithful Couple is a very intense male friendship, one that spans decades and classes. It's no wonder that the Independent called The Faithful Couple right up Patricia Highsmith alley, and they were right in that. The connection between Neil and Adam is one that, from the beginning of the novel, seems to be centred on both competitiveness, admiration and the very definite hints of homo-eroticism. Whereas more and more TV shows and films seem to include female friendships, popular culture doesn't have a lot of representations of male friendship. So seeing a whole novel dedicated to it is very interesting. Unfortunately the more Highsmith-esque elements of the book don't necessarily portray male friendship in the best of lights. 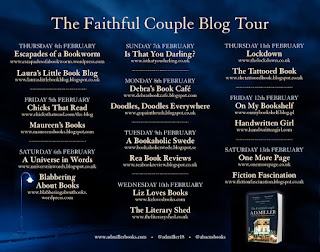 However, it was interesting to read and to see how A.D. Miller didn't shy away from giving his male characters emotions. This may sound strange, but by moving between the different characters and showing us their thought process and their feelings regarding the other, The Faithful Couple actually gives the reader male characters that are complex and complicated. Too often male portrayals in novels slip into cliche representations of what is "male" and as such male characters often fall flat for me. With Adam and Neil you get to two male characters who are not necessarily likeable but who have a human edge to them.

The novel spans over a number of years and each chapter/section heading is a different year. This approach means that at times the story may feel a little disjoined as the reader loses track of where which of the characters was. On the other hand it means that within each new section the reader gets a fresh new glance at these characters and at London, at how the relationship has grown outside of the narrative. But then throughout the novel it can become quite a problem to happily distinguish between Adam and Neil. Especially at the beginning the characterization isn't distinct enough that one can easily separate them or even pick a side in the plot. Although they are interesting characters they are a little bit too equal at times.

One of the problems I had with The Faithful Couple was that the horrific event that both binds Neil and Adam closer together but also tears them apart isn't actually as horrific or shocking as I was expecting from the blurb. When it happened I wasn't quite sure whether this was "the big event", but it felt too early within the story for it to make a real impact. What redeemed the original event for me was the fact that A.D. Miller quite nicely showed the impact of the knowledge of the event upon his characters. In the end it is things like guilt and and betrayal which can end friendships and A.D. Miller does show that, at times the original event just feels slightly anti-climactic.

I enjoyed reading The Faithful Couple although it at times lacked tension for me. Although the plot could have maybe been pushed a little bit further, I believe it's a great kind of suspense read for a weekend! I'd recommend it to fans of suspense and mystery. Check out the rest of the blog tour stops!