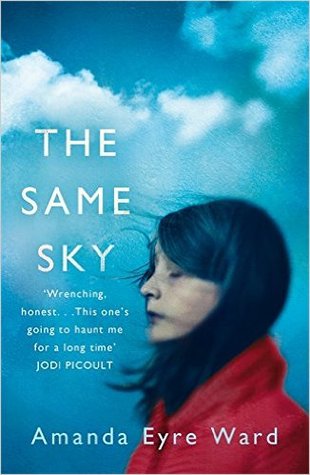 As the Syrian refugee crisis gets worse and worse, the question of how to "deal" with refugees, who they are and why they want to come to the West, The Same Sky hit me as an incredibly topical book. I was excited to start it and Ward captured me right away. Thanks to Blackfriars for providing me with a copy of this book in exchange for an honest review.

In this heart-rending and poignant novel, award-winning author Amanda Eyre Ward tells the story of Alice Conroe, a forty year old Texas barbecue owner who has the perfect life, except she and her husband long for a child. Unable to conceive, she’s trying desperately to adopt but her destiny is quickly altered by a young woman she’s never met.

Fearless thirteen-year-old Carla Trujilio is being raised by her grandmother in Honduras along with her four year old twin brothers. Her mother is sending money home from Texas where she’s trying to make a better life for her family, but she only has enough to bring one son to her. When Carla’s grandmother dies, Carla decides to take her fate into her own hands and embarks on a dangerous journey across the border with Junior, the twin left behind.

Two powerful journeys intersecting at a pivotal moment in time: Alice and Carla’s lives will be forever and profoundly changed. Heartbreaking, emotional, and arresting, this novel is about finding the courage to trail blaze your own path in life with faith, hope and love, no matter the struggle or the tragedy

I somehow have managed to attract a number of reads which have fascinating narrative structures. In The Same Sky Ward combines the stories of Alice, a Texan middle-aged woman, and Carla, a Honduran thirteen-year old girl. Rather than divide the book into chapters, it is simply split into short narrative bursts, Carla and Alice alternating as the main character. Ward makes this shift seem almost effortless despite the major differences between her characters' lives and identities, but this ease is deceiving. Not until halfway through the novel did I realise that one of the voices was "present" whereas the other was "past". I'm being purposefully vague because it's part of the wonder of the book to figure out where the characters are. But as often what isn't being said is as important as what is spelt out.

Motherhood is a major theme in this novel, both the absence of it and active desire for it. Alice is desperate to be a mother, having tried often and failed. Almost every girl will, in her life, be both a daughter and a mother. It feels like a natural progression, to go from one to the other, and much of society expects women to take their life in that direction. The fallout of not "full-filling" that expectation is very difficult and Ward captures it very well in both Alice and how the people around her act. For Carla the question about motherhood is almost opposite. Desperate for her mother to be near, she puts herself in incredibly danger while taking on a motherly role towards her brother Junior. The importance of parenting and nurturing really comes out in this book and in a way also reflects upon the countries that receive refugees. Shouldn't those countries who are better off open their arms to those in need?

As I hinted at above, Ward's writing is deceivingly clever while remaining straightforward. Especially Clara's story is told relatively simply while incredibly eloquent. Her struggles as a refugee, trying to cross into America, are hard enough without requiring embellishing. Even Clara, at times, seems to shy away from accepting the full experience while unflinchingly sharing it with us. Next to the two main characters Ward creates a variety of fascinating side characters, each of which seems taken straight from life. Whether it's Colorado, Texas, Mexico or Honduras, Ward sketches believable portraits of these places and transports the reader into a world that is completely opposite to their own.

I absolutely loved reading The Same Sky! Ward introduces the reader to two amazing characters, each of which will keep the reader gripped until the end. The way she unites the two diverging narratives is also beautiful. I'd recommend this to fans of General Fiction and Women's Fiction.
Posted by Juli Rahel at 2/16/2016 03:15:00 pm